Dublin share the scores around as they cruise past Laois

Walsh Cup: 14 players got on scoresheet for Mattie Kenny’s men and they now face Galway 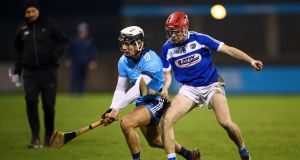 Dublin’s Cian Boland and Fiachra Fennell of Laois battle for the sliotar during their Walsh Cup clash. Photo: James Crombie/Inpho

A whopping 14 different Dublin scorers got on the scoresheet as Mattie Kenny’s men won by 14 points to career through to the Walsh Cup semi-finals.

Victory over Laois was slight revenge for last summer’s All-Ireland preliminary quarter-final loss and tees up a clash with Galway back at Parnell Park on Sunday.

Dublin were never troubled and led from Oisín O’Rorke’s second minute opening point from a free until full-time.

They led 0-4 to 0-1 after scores from Ronan Hayes, Cian Boland and Eamon Dillon and already Laois were under real pressure.

Eddie Brennan’s side did respond with their own three-in-a-row of points to leave just one in it again after 14 minutes.

But Dublin hit seven of the next eight points to cruise to a comfortable 0-13 to 0-7 interval lead.

Cian O’Callaghan featured in defence for Dublin for the first time since last year’s league while Rian McBride lined out after missing most of the 2019 Championship.

Former Cork under-21 Marc Howard was one of five players to come on for Dublin at half-time, making his debut in a blue jersey.

He got on the score-sheet with 0-2 while Tom Connolly continued to pick off some eye-catching points from long range.

Laois upped the ante for a period and outscored Dublin by 0-7 to 0-2 between the 42nd and 52nd minutes to reduce the deficit to four points.

But Dublin hit the accelerator from there with Hetherton hitting a 1-2 burst in just 90-seconds, and 1-3 in total, to seal it.

Chris Crummey, Alex O’Neill and former Down hurler Lorcan McMullan were all on the mark too while Howard closed out the scoring.