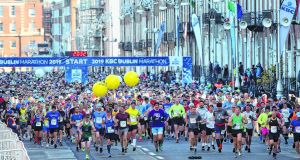 The 2019 Dublin Marathon was limited to 22,500 participants. Photograph: Nick Bradshaw

Such is the ever pressing interest for race entries into the KBC Dublin Marathon that the event organisers have further increased the entry limit to 25,000 – though still not enough to meet the demand.

This comes after the decision to introduce a part-lottery system to deal with the allocation of places for this year’s race, set for Sunday, October 25th, 2020, which overall attracted the interest of just over 35,000 applicants.

Some of the major city marathons already adopt a lottery entry system – namely London, New York and Tokyo – although after initially announcing a similar entry plan, the Dublin organisers backed down somewhat so that any runners wishing to return for the 2020 race would be guaranteed an entry provided they have run in any one of the previous three editions.

There were also 1,000 entries allocated to sponsors and tour operators, with a further 1,300 allocated to Athletics Ireland membership (the race doubles as the National Championships), in addition to the 16,100 lottery applications, bringing the overall estimated demand to 35,000.

These remaining 6,500 successful lottery applicants will today receive their code and will have until 31st January to claim their entry, with a second round of allocations in February.

“We know that there will be many runners disappointed,” said Dublin Marathon race director Jim Aughney. “But we cannot accommodate all interested individuals as we pride ourselves on delivering a quality event as the health and safety of participants is our primary concern.

“However, given that we now have an indication of the overall interest levels in participation, this will allow us to have meaningful conversations with our many stakeholders around the future and further development of the KBC Dublin Marathon. ”

Any initial places not redeemed by January 31st will be re-allocated by lottery to entrants who were not successful. The applicants will learn their entry status via SMS and email (between February 4th to February 7th). These offers must be redeemed by February 14th, 2020.

Another option to allow entrants to claim a refund will be made available in July. A refund of 70 per cent of the entry fee will be returned once the refund application has been accepted. Any unallocated entries (such as refunded numbers) will be offered to any unsuccessful lottery applicants on August 1st with offers needing to be redeemed by August 14th.

It all represents significant growth from the 2,100 people that lined up at the start of the first Dublin Marathon in 1980. There has been a record number of participants every year since 2009, and Dublin is now the fourth largest marathon in Europe.