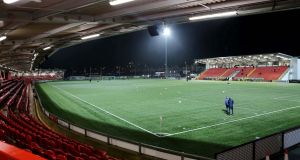 The Airtricity League will return tonight at the Brandywell Stadium in Derry. File photograph: Inpho

The Airtricity League kicks back into action tonight, with Derry City taking on Sligo Rovers at 5.45pm before Dundalk play St Pat’s at 7.45pm. Check out Emmet Malone’s team by team guide here, ahead of what will be a sprint finish. The asterisk will be back this season, that much we know already - but “however far short of an ideal season this one eventually ends up falling, it is still very good to be facing into the prospect of some competitive football being played again.” Brentford and Fulham will play for a Premier League place on Tuesday after Scott Parker’s side squeaked through their Championship playoff semi-final second leg against Cardiff last night. A 2-1 home defeat to Cardiff was enough to see Fulham edge the tie 3-2 on aggregate. In Premier League news, a Saudi Arabia-led consortium has withdrawn its bid to buy Newcastle United, and Manchester City have agreed to sign centre back Nathan Aké from Bournemouth for €43m.

Major champions Padraig Harrington and Francesco Molinari have withdrawn from next week’s PGA Championship in San Francisco. Neither player has competed on the PGA Tour since it resumed from the Covid-19 shutdown. Defending champion Brooks Koepka fired a superb eight-under par 62 to take a two-stroke lead after the first round of the St Jude Invitational in Memphis. Rory McIlroy made a poor start, the world No 2 shooting a three-over 73 which left him in grave danger of missing the cut, while Graeme McDowell and Shane Lowry are both two-under and in a share of 15th place. Co Down’s Cormac Sharvin is leading the way for the Irish contingent at the Hero Open at the Forest of Arden championship course in Warwickshire, with a two under par, 70.

1 German nudist chases wild boar that stole laptop at Berlin lake
2 Law allowing gardaí enforce movement restrictions in Kildare, Laois and Offaly comes into force
3 Midlands lockdown: ‘Why shut down Offaly and leave Dublin open?’
4 Meet the Bearman of Buncrana: ‘I knew about Joe Exotic for years’
5 Inside the dog-trafficking trade: ‘After drugs, it’s guns, then pups’
6 Irish in Australia: ‘We are in for a few hard years’
7 Revealed: the NPHET advice to Cabinet ahead of midlands lockdown
8 Sand-hued cyclepaths changing the face of south Dublin coast
9 All eyes on Tenet, the spy movie with everything to prove
10 Harry McGee: We are seeing the return of Straight-Talking Leo
11 Midlands lockdown: Movement restrictions in place for residents of Kildare, Laois and Offaly
12 Meat plant clusters may be down to softly-softly approach
13 Ross O’Carroll-Kelly: ‘We could be in DeVille’s among people who get where we’re coming from. Literally the Vico Road’
14 Frustration for Lowry and McIlroy as Li leads at US PGA
15 ‘Saudi Arabia is where the opportunities will happen in future’
16 Masks Q&A: Who has to wear them in shops and what happens if you don’t?
17 Tanya Sweeney: You get a lot of brain space back when you stop hating your body
18 Caroline O’Donoghue: ‘There is a real anger in Irish millennials’
19 David McWilliams: John Hume understood the power of credit
20 Cars to give way for Sandymount cycle path
21 Pat Hume: The woman who never gave up
22 Cliff Taylor: As we reawaken the economy, we find Sleeping Beauty has a hangover
23 British cash for Northern Ireland shows scale of Brexit disruption
24 We sent two journalists for antibody tests – one with a Covid-19 diagnosis, one without
25 Scarlet for ya: Paul Mescal does classic Connell in The Rolling Stones’ new video
26 What’s the story with dining out under new Covid-19 regulations?
27 Escape to west Cork: Majestic views, spectacular food and a warm welcome
28 Have young people stopped following Covid-19 advice on travel and parties?
29 ‘Deep and urgent threat’: Martin defends midlands lockdown
30 MSD buys Takeda biologics plant in Dunboyne
31 Pandemic problems: Experts answer your queries on sex, parenting and relationships
32 Home renovation basics: the costs and how to get started
33 Main points: What restrictions have been imposed on Kildare, Offaly and Laois?
34 Up to 750,000 UK Covid-19 test kits recalled over safety concerns
35 Catholic Church faces challenges as places of worship reopen
36 Democracy for Sale: A plunge into murky waters
37 10 upgrades that will add value to your home and 5 that probably won’t
38 How a ship abandoned by its owner brought deadly cargo to Beirut
39 Half of people in direct provision ‘unable’ to social distance
40 Michael Walker: Pressure mounts on Barcelona to stop slide
Real news has value SUBSCRIBE