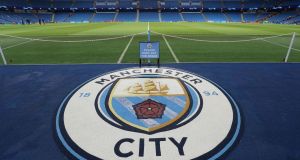 Manchester City said: ‘The questions and matters raised by Der Spiegel appear to be a cynical attempt to publicly re-litigate and undermine a case that has been fully adjudicated.’ Photo: Martin Rickett/PA Wire

The German magazine Der Spiegel has published new “leaked” emails relating to Manchester City’s past sponsorships by Abu Dhabi state companies, which it claims cast doubt on the court of arbitration for sport judgment that overturned City’s ban by Uefa.

In one of the emails, a City director, Simon Pearce, who was also a senior executive in an Abu Dhabi government authority, set out that he was “forwarding” the airline £91m (€100m) of £99m (€109m) that Etihad owed to the club for its sponsorship, with Etihad providing only £8m (€8.8m).

City refused to comment on the substance of the new emails, maintaining as the club has since the first “leaks” in November 2018 that their emails were “criminally obtained”. Spiegel’s source, Rui Pinto, who is charged with computer hacking in his native Portugal, which he denies, has denied that he obtained the City emails by criminal means.

City have vehemently denied that the Etihad sponsorship was subsidised by the club’s owner, Sheikh Mansour of the Abu Dhabi ruling family, or any other Abu Dhabi entity, since Spiegel first published the emails, and throughout the subsequent investigation and ultimate guilty finding by Uefa’s Club Financial Control Body (CFCB) adjudicatory chamber (AC). Pearce and senior Etihad executives gave evidence at the Cas hearing, categorically denying the finding, largely based on the published emails, that the airline did not pay the sponsorships in full.

The emails considered by the CFCB and Cas included three from City’s then financial officers to Pearce, a City board member and senior adviser on the Executive Affairs Authority (EAA), a strategic Abu Dhabi government authority. The finance officers set out that in 2012-13, 2013-14 and 2015-16 Etihad paid only £8m (€8.8m) of sponsorship deals City stated to be £35m (€38.9m), £65m (€71.8m) and £67.5m (€75m) respectively. The rest, they wrote, was being paid by Mansour’s company ownership vehicle, the Abu Dhabi United Group (ADUG).

City had refused requests from the CFCB for Pearce and other senior people to give evidence, and Cas severely criticised the club and imposed a €10m fine for their failure to cooperate and obstruction of the investigation. Pearce did appear before Cas, as did James Hogan, the former Etihad chief executive, and other senior figures, and based largely on their evidence, the Cas panel overturned by a 2-1 majority the CFCB conclusion that Mansour “disguised” his own funding as Etihad sponsorship.

“So we should be receiving a total of £99m – of which you will provide £8m,” he wrote to Baumgartner. ”I therefore should have forwarded £91m and instead have sent you only £88.5m. I effectively owe you £2.5m.”

Pearce apologised to Baumgartner for the missing £2.5m he had not sent, writing: “As I am sure you knew, embarrassingly it would seem that rather than overpaying you I have underpaid you!”

The figure of £88.5m Pearce apparently sent to Etihad for forwarding to City tallies with the same figure, £88.5m, set out to Pearce in one of the previously published emails. That was sent five days earlier by Jorge Chumillas, City’s then chief financial officer, who said the breakdown of Etihad’s sponsorship of City was £88.5m from ADUG, while Etihad were paying £8m.

Pearce’s evidence to Cas about the City’s finance officers writing in their emails that only £8m was coming from Etihad, was that the arrangements had caused “some confusion among individuals at the club” and “a misunderstanding that ADUG was making funds available to Etihad”.

City declined to provide a response to the contents of the new emails, as they did publicly in 2018, so they did not explain why or in what capacity Pearce was apparently sending £91m to the chief commercial officer of Etihad for its sponsorship of City.

The club said in a statement: “The questions and matters raised by Der Spiegel appear to be a cynical attempt to publicly re-litigate and undermine a case that has been fully adjudicated, after detailed proceedings and due process, by the court of arbitration for sport.

“Manchester City’s policy remains not to comment on out of context materials purported to have been criminally obtained from City Football Group and Manchester City personnel.” – Guardian

1 James Ryan injury could open the door for Ryan Baird
2 Ken Early: Frank Lampard’s problems start at number one
3 Series is gone but Kevin O’Brien and Ireland playing for ‘individual pride’
4 Shane Lowry finds some welcome form as US PGA looms
5 Man United in talks with Dortmund over €100m deal for Sancho
Real news has value SUBSCRIBE
Crossword Get access to over 6,000 interactive crosswords