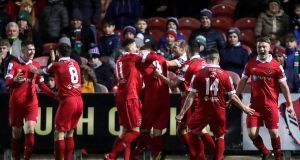 Shelbourne will fancy themselves to make a run at qualifying for Europe when the Airtricity League restarts. Photo: Laszlo Geczo/Inpho

With the Airtricity League restarting on Friday, Emmet Malone looks at the teams ahead of what will be a sprint finish.

Keith Long’s side went well after the opening day defeat by cross city rivals Shamrock Rovers with three 2-0 wins from the four games leaving them third in the table and with some cause for confidence regarding the rest of the season.

Sure enough, they are very much as they were before the shutdown with no significant movement in or out. There was a bit of a scare when top scorer Danny Mandroiu picked up an injury in a friendly but the midfielder is expected to be fit for the trip to Turner’s Cross.

It has been a busy spell for Neale Fenn as he sought to strengthen in the wake of a decidedly difficult start to the campaign. Graham Cummins and Kevin O’Connor have returned to the club from Waterford while Deshane Dalling and Joseph Olowu, two loan signings who showed potential through those opening games, have been retained.

A couple more signings are expected and with Cummins preferring to play in defence these days the plan is that one will be a prolific striker. They could certainly do with one.

As with quite a few of the clubs who had brought in loan players at the start of the season, Derry have had to a bit more wheeling and dealing ahead of the restart. Tim Nilsen’s departure has attracted the most attention but Adam Liddle, Jamie McDonagh and Danny Lupano have all gone too and much will depend on how replacements Adam Hammill, Joe Thomson, Ibrahim Meite and James Akintunde settle in.

The club tried to get last year’s top scorer, Junior Ogedi-Uzokwe back in but the striker opted for Sligo instead.

Losing to their main title rivals in Tallaght aside, Vinny Perth’s team did nothing much wrong before the shutdown and will feel confident enough that they can overturn the three-point deficit during what remains of the shortened season.

Having had very little opportunity to live up to the hype so far, Stefan Colovic should be in a position to push for a starting position while Josh Gatt and David McMillan have both been added. They join a group that certainly knows what winning a league is all about.

There was a sense before the season that Harps were trying to push on slightly so as to avoid a repeat of the nerve-racking end to their 2019 campaign and Ollie Horgan must have been encouraged by the start his side made this time around even if the shine came off a little after the first two games.

As ever they are missing one or two to long term injury with Mark Timlin, for instance, not expected to play again this season but in the worst case scenario, they have a four point start on Sligo in any race for survival.

The Dubliners had a couple of decent results before the shutdown but a couple of disappointing ones too and it is not completely clear yet just how their season is going to pan out but they do look to have the potential to push on.

The core of the team is experienced and capable while hopes seem to be high regarding Jordan Gibson and David Titov who signed this week. They have, it seems, been around for a few weeks and are eligible to play in Dundalk but on loan striker Georgie Kelly will not feature in Oriel Park.

The league leaders have generally looked very impressive over the very early stages of the campaign with just about everything Stephen Bradley has tried seeming to come off.

Greg Bolger is out long term after suffering a serious injury in a recent friendly but the lay-off has allowed Sean Kavanagh some time to work his way back towards full fitness and he is reckoned to by just a week or two away. Beyond that, there is a lot of depth to the squad these days but it will be interesting to see how they all cope with any sort of serious setback.

One of three teams on two wins from four, Shelbourne have, perhaps, exceeded expectations to date and despite losing 2-1, their performance against Dundalk showed that on their day they have the capacity to unsettle even the very best sides with a high energy approach to applying unfashionable tactics rather well.

Gary Deegan was the star that night and seems fairly central to their prospects for the rest of the campaign but they have looked very well organised and confident so far. Young midfielder Brian McManus has been the only new addition.

After a dismal start to the season, Liam Buckley’s side will get things going again with what looks an interesting test away to Derry. They will be strengthened by the return to fitness of Ronan Murray and Lewis Banks while Johnny Dunleavy is also available but Danny Kane is a few weeks away, John Mahon perhaps more than that.

Junior Ogedi-Uzokwe will be a very good addition if he can recapture the goalscoring form he showed for Derry last season. He will not feature against his former club, though, as he is currently quarantining after arriving back into the country.

No team has had more change to deal with over the course of the shutdown but Waterford are potentially in a better place than some might have imagined as they prepare to get playing again. A handful of players have gone and John Sheridan has no experience of the league but the former international has a lot in England and Daryl Murphy seems set to sign once he recovers from a calf strain.

Michael O’Connor has also stayed on and a number of other signings were being worked on this week.