Duke recalls getting a policeman to shine laser on player: ‘It put him off for 10 minutes’ 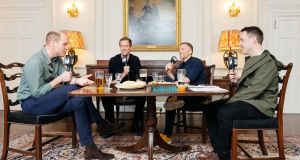 Prince William, the Duke of Cambridge, with Peter Crouch, Tom Fordyce and Chris Stark during a recording of That Peter Crouch Podcast, in which William discussed his schooldays playing soccer, and revealed his favourite karaoke song was Queen’s Bohemian Rhapsody. Photograph: Kensington Palace/PA Wire

The Duke of Cambridge has joked about warding off a schoolboy football opponent by getting a protection officer to pose as a mock sniper.

William said that when he played “everyone wanted to break my legs”, but he once asked a policeman to shine a laser’s red dot on the troublesome player - although it only kept him away for 10 minutes.

The future king’s candid comments came when he shared banter, embarrassing confessions and a pint during an appearance on BBC Radio Five Live’s That Peter Crouch Podcast.

The duke has been spearheading the Heads Up campaign to get football fans talking about their problems, and in the wide-ranging chat revealed he enjoyed a stag do in Blackpool, Queen’s Bohemian Rhapsody is his go-to karaoke song, and a pair of binoculars given to Kate as an early courtship present was not well received.

During the podcast, recorded at Kensington Palace before the lockdown in March and featuring a catch-up video call earlier this month, William said: “A long time ago, I got one of my policemen to take a laser pen out with them. And I got him to red mark, red dot one of the players.

We all have to stay mentally fit. It’s a strength to talk about your mental health, not a weakness

Crouch, a former England forward, asked laughing: “Pretending to have a sniper on him?” and William replied: “Exactly . . . it put him off for about, you know, 10 minutes.”

The duke self-deprecatingly referred to his defending style as a “fat knacker running around at the back, panting”, but once persuaded former England captain David Beckham to join his regular six-a-side team for a game.

In recent years his passion for his football club Aston Villa has intensified. “Since being a dad, without a doubt, football has become way more important to me than it ever used to, it’s really weird. Like it’s changed a lot.

“I need to go and be amongst other guys and kind of let out a bit of steam, shout a bit. Not abuse the referee – because I’m the president of the FA and I can’t do that – but in my head I am.”

At the start of the podcast, William answered a knock at the room door and was handed a takeaway curry from Crouch’s local Indian restaurant in Ealing, west London.

The duke quipped: “There’s an Uber driver out there on the floor being frisked,” and when quizzed about his favourite Indian dish, replied: “Chicken masala, love that, a bit of flavour – I’m not a vindaloo man, put it that way.”

The podcast group enjoyed drinks as they chatted, with most of the guests sipping Guinness while William enjoyed what appeared to be a pint of lager.

On his Heads Up campaign, the duke said: “We all have mental health, and we all have to stay mentally fit.

I have no idea why I bought her a pair of binoculars, it seemed like a good idea at the time

“It’s a strength to talk about your mental health, it’s not a weakness. You know, if you’re not feeling well, something’s bothering you, talk about it –it’s not a problem.”

The conversation turned to the worst presents bought for a partner, and after Crouch confessed to buying his model wife Abbey Clancy a raincoat for three years running, William said: “I did get my wife a pair of binoculars once – she’s never let me forget that.

“That was early on in the courtship, that was . . . think that sealed the deal,” and, with Crouch laughing, he added: “It didn’t go well. Honestly, I have no idea why I bought her a pair of binoculars, it seemed like a good idea at the time.”

William clearly enjoyed recording the podcast but had to run the gauntlet of messages from listeners, and one read out from a man identified only as Patrick said he met William, out with RAF mates, when he caught his eye while they were in the toilets during the half-time break at a Blackpool match.

The duke replied: “Well I can’t vouch for me eyeing someone up in the loo, it sounds really quite awkward, but I was at a Blackpool game on a stag do. I wasn’t in fancy dress – it wasn’t my stag do. We had a good day.”

Blackpool’s then manager Ian Holloway came out to talk to William’s group and the duke said: “I was like, ‘Why aren’t you doing a team talk and instead you’re talking to a stag do?’ He was like, ‘No point doing a frickin’ team talk, they’re not listening anyway’.

“It was a good game and we went on the theme park in the afternoon, which, after you’ve had a few beers on a stag do, is not pretty.”

During the lighthearted chat, which also featured podcast co-presenters Tom Fordyce and Chris Stark, William was asked about his favourite song to sing in public. “To be honest, I’m not going to lie, I haven’t sung karaoke for a while now, but probably Queen’s Bohemian Rhapsody.

“It’s one of the few songs I know all the lyrics to.”

I have to say I’m a bit embarrassed about my maths knowledge, I mean, I can’t do a year-two maths

Crouch previously appeared on the BBC’s documentary A Royal Team Talk alongside William in May last year, when he talked about how the verbal abuse he suffered as a young man affected his mental health.

Asked about how he coped with home-schooling his three young children, the duke said he discovered Kate had “super patience” while he did not, but they worked well as a “tag” team with his wife stepping in when things went wrong.

He added: “But I have to say I’m a bit embarrassed about my maths knowledge, I mean, I can’t do a year-two maths, so that was quite an eye-opener as well.”

The duke, who has had this weekend’s FA Cup final named after his Heads Up campaign, concluded by saying lockdown had been a “bit of an awakening, that we maybe take our lives a bit for granted sometimes, and actually there’s a lot of things out there that can wobble all of us, at anytime”.