Patrick Mullins defies the weights to win on Aramon 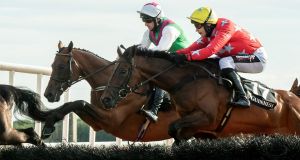 A couple of years after Sharjah successfully conceded weight all-round, Aramon carried an even bigger burden to victory in Thursday evening’s €200,000 feature at Ballybrit.

The 7-1 shot emerged on top by over two lengths from the 40-1 outsider Hearts Are Trumps with his fellow topweight, Petit Mouchoir, in third.

The well backed 4-1 favourite Felix Desjy, on who Keith Donoghue substituted for the injured Davy Russell, fell at the second flight when racing midfield.

Felix Desjy had been widely expected to cut out the running but instead it was the English raider Hunter’s Call that set a stop-start pace for much of the contest with Aramon keeping close tabs.

Hunter’s Call ultimately faded to fourth up the hill but Aramon – a Grade One winner as a novice – made his class tell in the closing stages despite carrying 11.10. It was the biggest weight carried to success in the big handicap for over 20 years.

“Incredible, and on top of that lugging me around, so no easy feat!” said Mullins, already Ireland’s most successful ever amateur rider and an 11-times champion.

“I thought he might be placed. All yesterday it was raining and I thought that’s our chance gone. When I got here today I walked around and looked at the time of the first race and thought it isn’t too slow. So we decided to be positive, roll the dice and it worked out,” Mullins added.

It was a fourth win in the race for his father, champion trainer Willie Mullins, whose “tough love” approach helped his 30-year-old son secure a perfect position in a tactical race.

“He gave me a good bollocking for missing the break in the Galway Plate so I wasn’t going to miss it today - that was probably the winning of the race!” the winning rider joked.

“He’s got a lot of speed. We got to set our own fractions which turned it into a sprint which probably negated the weight.

“It’s an iconic race. You’d have the Galway hurdle over the vast majority of Grade Ones. Being my weight, I’m 11 and a half stone, I thought I might get to ride in it. I never thought I’d win it, never mind twice. But when you’re riding for my father, anything is possible. He’s an incredible man,” he added.

That sentiment got underlined in the following race as the 2-7 favourite Jon Snow landed a novice hurdle to bring Willie Mullins’s tally to six winners for the week.

Power Of Pause started favourite for the in-form father-son team in the bumper but had to give best to Joseph O’Brien’s 11-4 shot Slige Dala.

Separately, Denis Hogan, one of the rising stars of the training ranks, managed a perfect exit from juggling that role with riding in an earlier handicap hurdle.

The Co Tipperary-based trainer donned silks for the final time and rode Bua Boy to beat stable companion Alabaster in a 1-2 that prompted his decision to retire and concentrate solely on training in future.

“I’ve really enjoyed it. It’s hard to let go. There are more things going on these days. It’s gone so busy at home. There are days that I can’t think what’s going on there’s so much happening. I wouldn’t even know I was riding sometimes it was getting so busy,” he said.

“I’ve always liked Galway. I always trained everything for Galway and I always thought if there was time to go it was here. It’s my favourite track,” added Hogan whose growing string is headed by the top sprinter Sceptical.

Just denied a Group One earlier in the day with One Voice coming up just short of Fancy Blue in Goodwood’s Nassau Stakes, Jessica Harrington managed some cross-code compensation when Robbie Power dominated the Grade Three Rockshore Novice Chase from the front on Polished Steel.

The 11-8 favourite Russian Diamond crashed out with almost a circuit to go and it was left to the veteran 100-1 shot My Manekineko to chase home the winner who had had nine lengths in hand despite ground concerns.

“He’s much better on good ground but it didn’t look the strongest Grade Three contest,” Power said. “He’s grown up and is a stronger horse now. He wouldn’t want it any softer but got away with it.”

1 Ken Early: Frank Lampard’s problems start at number one
2 All in the Game: Klopp gets the last laugh in quiz show
3 The Offload: Schools rugby talk in the Seanad appears tone deaf
4 Rory McIlroy admits missing the crowds as he looks to end Major drought
5 Justin Thomas takes world No1 with victory in Memphis
Real news has value SUBSCRIBE

Ronnie O’Sullivan records fastest win in Crucible history 10:57
Justin Thomas takes world No1 with victory in Memphis 09:06
The Offload: Schools rugby talk in the Seanad appears tone deaf 09:00
All in the Game: Klopp gets the last laugh in quiz show 09:00
Sporting Cathedrals: How the Olympiastadion overcame history 08:00
Here is your handy guide to sport on television this week