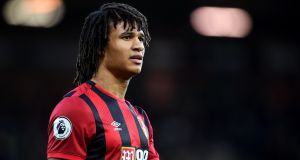 Manchester City have agreed to sign Nathan Aké from Bournemouth for £39m (€43m), taking their outlay in two days to more than £63m (€70m) after a deal was struck to buy the winger Ferran Torres from Valencia.

Pep Guardiola turned to Aké after hitting problems in pursuit of Napoli’s Kalidou Koulibaly. The fee represents a significant profit for Bournemouth, who signed the Netherlands international from Chelsea for £20m in 2017.

Aké’s departure became inevitable after Bournemouth’s relegation from the Premier League and with the 25-year-old not having a clause to reduce his wages, although City had expected to sign him in any event.

Guardiola has been intent on strengthening his defence after City’s limp title defence following the departure of Vincent Kompany and with John Stones failing to live up to expectations.

City’s manager lined up Torres after Leroy Sané’s move to Bayern Munich. Last season the Spaniard became Valencia’s youngest goalscorer in the Champions League and he will cost an initial £24.5m. - Guardian