Frustration for Rory McIlory as Koepka rediscovers his rhythm in Memphis 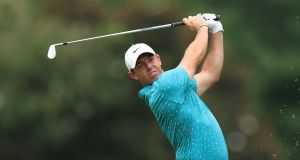 Rory McIlroy plays a shot on the 10th hole during the first round of the World Golf Championship-FedEx St Jude Invitational at TPC Southwind in Memphis, Tennessee. Photo: Andy Lyons/Getty Images

Brooks Koepka’s return to form could hardly be more opportune as he seeks to defend not only the WGC FedEx St Jude Invitational but also next week’s US PGA Championship that takes place at Harding Park in San Francisco.

It’s almost a year since Koepka last finished in the Top 10 in a PGA Tour event – he has missed a couple of cuts recently – but the four-time Major winner looked to have rediscovered his playing rhythm as he ravaged the TPC Southwind course.

In winning last year’s tournament in Memphis he holed 63 of 65 putts inside 10 feet, and that assurance on the greens was very much in evidence once again. The course had been left vulnerable following three quarters of an inch of overnight rain; the putting surfaces were soft and receptive to accurate approach play, generally with short irons. The only prerequisite was finding fairways to avail of the benign scoring conditions.

Koepka rattled in seven birdies in the first 11 holes, the only aberration on the seventh when a wild tee shot came to rest against the perimeter fencing. He shrugged off the setback. Picking up two more birdies in a strong back nine to record his equal-lowest total on the PGA Tour. His superb eight-under par 62 gave him a two-stroke lead after the first round.

He led from fellow Americans Rickie Fowler and Brendon Todd, who finished with a flourish with four straight birdies.

Rory McIlroy made a poor start, the world No 2 shooting a three-over 73 which left him in grave danger of missing the cut.

Graeme McDowell’s two-under 68 leaves him in a share of 15th place along with fellow Irishman Shane Lowry.

The day started on a sombre note, players, caddies and officials sporting rainbow coloured ribbons on their caps or collars in a tribute to Mia, the 22-month-old daughter of Colombia’s Camilo Villegas, who died on Sunday after being diagnosed with tumours on her brain and spine in March.

Unfortunately from an Irish perspective, McIlroy endured a frustrating time. Starting on the 10th, he suffered a sloppy start to his round, the primary trouble coming at two par threes, the 11th and the 14th, errors that cost him a shot apiece. A miscalculation in club selection saw him dump his tee shot in the water in similar fashion to Lowry; he was at least a club short at the 140-yard, par three 11th.

He did superbly to get up and down from 93 yards, a high point in the first six holes. The 14th cost him another shot, this time three-putting from 20 feet. A consistent bugbear was his approach play; he simply wasn’t getting the ball close enough to the hole.

His game disintegrated further on the front nine, a third bogey, again on a par three, coming after he found a greenside trap. A poor tee shot at the next saw him drop another shot and he made it a hat-trick of bogeys to slip to five over when he found a fairway bunker with his tee shot on the sixth. Two birdies in his final three holes allowed him to finish on a positive. The key for him will be to try to rediscover the form that has eluded him since the tour resumption in June.

McDowell couldn’t make any headway on a day when over half the field were in red figures, birdie-less as he entered the last third of his round. But then he made three in a row, drilling putts of 23 and 35 feet on holes seven and eight.

Lowry will have been disappointed with three missed cuts in five tournaments since the PGA Tour resumed in June but he was quickly into his stride, with two birdies in the first three holes, converting a gorgeous wedge to three feet at the second and holing from six feet, at the par five third.

He continued to play nicely until a wayward drive on the seventh cost him a shot. Lowry didn’t let the setback bother him and on the ninth recorded a third birdie, holing from 16 feet. The par three 11th hole would prove his Waterloo, recording a double after a wet tee shot. The momentum of his early excellence had ground to a halt, although he recovered with two birdies on his final four holes.

Collated first round scores in the St Jude Invitational (USA unless stated, par 70):

1 Cian Healy: ‘Realistically I got away with murder when I was younger’
2 Johnny Sexton: ‘We just know we have to be a lot better in all areas on Saturday’
3 Seán O’Brien: Anger over my parents’ break-up never left me
4 Gerry Thornley: Antoine Dupont and France look perfectly primed for Ireland visit
5 Ireland's centre will hold thanks to Henshaw and Aki’s midfield muscle memory
Real news has value SUBSCRIBE

Sub-four miler Michael Woods kicks to another Vuelta stage win 18:03
Ukraine’s win in Greece leaves Ireland needing to beat Germany 17:44
Ladbrokes and Coral to leave racecourse betting rings in Ireland and Britain 17:12
Barbarians’ coronavirus breaches will not be investigated by police 16:57
Cian Healy: ‘Realistically I got away with murder when I was younger’ 16:44
Here is your handy guide to sport on television this week