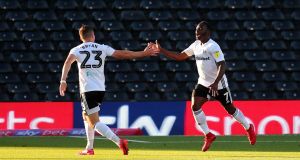 Until the last half-decade a west-London derby between Fulham and Brentford would have been more familiar as a third-tier skirmish. But they will play for a Premier League place on Tuesday and Scott Parker’s side will be thanking their lucky stars to have squeaked through.

This tie looked dead on arrival given the lead they had amassed in the first leg but Cardiff roared back, scoring through Curtis Nelson and Lee Tomlin after throw-ins had caused havoc, before coming desperately close to completing the turnaround late on. Neeskens Kebano’s strike made the difference but the celebrations at full-time took second place to sheer relief at making it through in one piece.

Cardiff had pitched up on the kind of blazing, amber-lit riverside evening that usually feels alive with possibility. The sense was that appearances might be deceptive given no side had ever overturned a two-goal first-leg deficit in the Championship play-offs, and the foreboding did not end there. Monday’s home defeat was not even their first 2-0 reverse against these opponents this month; Fulham had won comfortably in a league game three weeks previously and it was hard, at the outset, to see how a new page of history might be written.

Neil Harris, though, had warned Cardiff would be a ‘dangerous wounded animal’ and it only took eight minutes for them to bite back. They had begun aggressively, making up in size and directness for what they lacked in passing and poise. Nelson’s goal was a curiosity given the buildup to the corner from which it came. Will Vaulks, one of three newcomers to Harris’s selection, had boomed in his second long throw of the night and it travelled so far that, via a bounce, it would have dropped under Marek Rodak’s crossbar. That would not have mattered, given nobody appeared to touch it on the way through, but the Fulham keeper was leaving nothing to chance and tipped over.

Ralls whipped in the resulting set-piece and it was no huge surprise that Cardiff, superbly drilled in these situations, should score. Nelson got a run on the defence and headed emphatically past Rodak, who was neither here nor there, and for a few moments the sunlight seemed to be suffusing miracles after all.

Cardiff had no need to hurry now. They were back in the tie and this would have been the moment to dig in, knowing another chance would crop up if they were resilient in their own box. It seemed a good idea but proved fanciful within 24 seconds of the restart. Bobby Decordova-Reid, their former striker, was offered a generous amount of space down the right and Kebano, whose late free-kick in south Wales seemed to have sealed the tie, slipped in a neat finish from his low cross.

As you were, then, and Fulham took their cue to dictate the tempo. They had the better chances for the rest of the first half, particularly when Josh Onomah – who had brilliantly broken the first-leg deadlock – shot against Kebano when well placed.

Sean Morrison, a threat from Cardiff’s intermittent string of throw-ins and corners at the other end, then made a vital tackle on Decordova-Reid as he broke clear before Anthony Knockaert forced a fingertip save from Alex Smithies from 20 yards.

Knockaert saw a shot deflect agonisingly over before half-time after Smithies had saved a long-range blast from Cyrus Christie and Cardiff, while ruing the speed of their concession, were not quite down and out when the teams went in.

Within 90 seconds of their re-emergence, their pulse was stronger than ever. Tomlin had been introduced at the interval alongside another forward, Nathaniel Mendez-Laing, and the two lurked as Vaulks unfurled his latest howitzer. Mendez-Laing threw himself into a header and Rodak saved spectacularly; Tomlin, though, was perfectly placed to sweep home.

This time Cardiff survived Fulham’s attempt at an instant response and now we unmistakably had a tie. Anyone bar Josh Murphy might have buried Mendez-Laing’s cross at the far post but, unmarked, he headed at Rodak. Then Leandro Bacuna delivered and Danny Ward missed by a whisker. The tone had transformed, Cardiff spreading the play wide, pushing high and asking constant questions. Fulham’s jitters were palpable but when they awoke their own substitute, Aboubakar Kamara, drew more good work from Smithies before thudding low against a post.

Rodak outdid that with 18 minutes left, tipping over quite breathtakingly from Vaulks’ volley after Fulham had fended off a goalmouth scramble. This was exceptional entertainment now: urgent, intense, swinging from end to end. Even without supporters, these occasions take on a life of their own. Mendez-Laing battered another effort wide, while Fulham might have wished the watching Aleksandar Mitrovic was fit to convert one fizzed Kamara centre. When one last chance fell Cardiff’s way deep into stoppage time, Robert Glatzel volleyed over and Fulham somehow survived. – Guardian