Canardier can make winning return at Galway on Friday 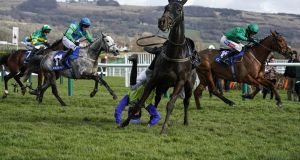 Champion jockey Paul Townend had an abundance of choice for Friday evening’s Galway festival feature so his decision to opt for Canardier looks significant.

The horse is one of seven Willie Mullins hopefuls lining up in the €80,000 Guinness Handicap Hurdle and brings perhaps the most uninspiring set of form-figures into the contest.

On the face of it, three runs in the last 14 months which have yielded two falls and an unplaced effort aren’t particularly encouraging.

However the last of them was when crashing out at the last in Cheltenham’s Coral Cup after running a big race despite being hampered at a crucial stage.

That was Canardier’s first run for Mullins since transferring from Dermot McLoughlin’s care where he had won three times.

Considering this is his first start in over four months it’s encouraging that he has a history of running well after a break.

Perhaps even more encouraging though is Townsend’s decision to pick him from a strong-Mullins team as the champion trainer bids to win the valuable pot for a fourth time in six years.

Great White Shark was third a year ago and again comes here on the back of a run in Monday’s big amateur prize when hardly suited by a slow pace.

Foveros is another Mullins contender while lurking at the bottom of the weights is Pilbara, runner up here on Wednesday.

The unique circumstances of the coronavirus pandemic means Galway doesn’t have the racing landscape to itself over the coming days.

Ballybrit’s jumps fixture on Friday is preceded by a flat card at Leopardstown where much interest is likely to focus on Flying Scotsman’s third run in five days.

A step up to a mile-and-a-half was pointed to as an explanation for the improvement in form of the JP McManus-owned three-year-old when he won in Galway on Monday.

First-time cheek-pieces helped him score again a day later when dropped back to a mile and Flying Scotsman lines up for another handicap over an intermediate 10 furlong trip on Friday.

His stable companions Galileo Chrome and Choice Of Mine could fight out the finish of an earlier conditions event.

Dermot Weld’s superbly bred filly Federica Sophia showed plenty of promise on her Cork debut earlier this month behind Too Soon To Panic.

The daughter of Galileo can one better this time in a mile-and-a-quarter maiden.