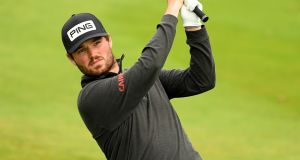 Spain dominated the leaderboard on the opening day of the Hero Open at the Forest of Arden championship course in Warwickshire, commandeering the top three places with Sebastian Garcia Rodriguez setting the pace with a stunning, course record, 62.

The 26- year-old amassed two eagles and eight birdies in his round, offset by a couple of bogeys, to enjoy a two short advantage over compatriots, Pablo Larrazabal and Miguel Angel Jimenez. The 56-year-old Jimenez celebrated making European Tour history – he was playing for a record 707th time eclipsing the mark he had previously shared with Sam Torrance – with a flawless 64, that included eight birdies.

Jimenez already has several other landmark achievements on tour including the most holes-in-one as well as being the oldest winner during a career in which he has won 21 tournaments. Larrazabal managed nine birdies on the card with just a single dropped shot at the 14th.

It was a more sedate day for the Irish contingent with Co Down’s Cormac Sharvin leading the way with a two under par, 70. It looked less promising at the turn when he was a couple over but an eagle and two birdies made the inward nine more palatable. Having missed the cut by a shot last week he’ll be determined to be around for the weekend.

Jonathan Caldwell, who finished in a tie for eighth place at the British Masters, opened with a 71 but it was a frustrating day for both Gavin Moynihan and Paul Dunne, who signed for 73 and 74 respectively. Moynihan was two under for his round after 12 holes but three bogeys on 13, 16 and 18 proved a rather expensive finish.

Dunne, playing in his second tournament following a nine-month absence with a wrist injury, failed to muster a single birdie; 16 pars and bogeys on 10 and 18 leaves him with plenty to do to make the weekend.