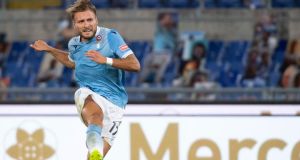 Lazio’s Ciro Immobile is one goal short of Gonzalo Higuaín’s record for most goals in a Serie A season. Photograph: EPA

To listen to Ciro Immobile on Wednesday night was to wonder whether he might be in the wrong line of work. “I hate it when I absolutely have to score,” he said at the end of Lazio’s 2-0 win over Brescia. “It just doesn’t sit right.”

A surprising sentiment, for a man who has made his living scoring goals – and who happens to be very good at it. Immobile netted his 35th of this Serie A campaign just a few minutes earlier, running on to Joaquín Correa’s through-ball and sweeping one of his calling-card sidefoot finishes beyond the goalkeeper Lorenzo Andrenacci.

Yet this was an occasion when Immobile really ought to have had a hatful. Moments before, he had missed from an almost identical position. Afterwards, he had a shot well saved by Andrenacci before seeing another crash off the post. He made no attempt to hide his frustration, collapsing on his back following the first of those misses and glaring at the night sky. After the last, he pelted the ball into an advertising hoarding. Even at the final whistle, he stood and gesticulated grumpily by the centre-circle.

All this, for a game Lazio had won – not that the result mattered a great deal. Their place in the top four was already guaranteed, as was Brescia’s relegation.

When Immobile spoke of an obligation to score, he was referring only to his personal bid to beat Gonzalo Higuaín’s record for most goals in a Serie A season. Wednesday’s strike leaves him one short of the mark set by the Argentinian four years ago. Immobile had hoped for more against opponents who have conceded 78 this season.

He still has one more game to reach his target. Fittingly, it is against Napoli – the team for which Higuaín was playing when he set the record. Naples is also where Immobile grew up. As a youngster, it was his dream to play for the Partenopei, though these days he says his heart belongs only to Lazio.

How could it not? Immobile’s career was drifting off course when the Biancocelesti signed him in the summer of 2016 for less than €10m. He had swapped Serie A for the Bundesliga two years before, scoring just three times in 24 league appearances at Borussia Dortmund before enduring a similarly unhappy spell at Sevilla, who packed him off on loan after six months.

At Lazio, things were different from the start. Immobile arrived in the same summer as Simone Inzaghi, who structured his whole team to play to the striker’s strengths: a fast-breaking, vertical football designed to draw opponents on and then release No 17 into the spaces they left behind.

It has been an unqualified success, Immobile scoring 102 times in 141 Serie A appearances. He was the division’s top scorer in 2017-18 despite missing five matches with a hamstring injury. Without it, he might even have challenged Leo Messi for that season’s European Golden Shoe.

He is in position to claim the award this time around, his goal against Brescia moving him ahead of Robert Lewandowski. Cristiano Ronaldo could yet overtake him, but now sits three behind with one game remaining – which he might not even start. Maurizio Sarri has threatened to field Juventus’s Under-23s against Roma so that first-teamers can rest before their Champions League last-16 clash with Lyon.

Immobile has been aided by Serie A’s implementation of VAR and strict interpretation of the new handball rule. A whopping 14 of his goals have come from penalties, in a season when the league long ago shattered its record for most spot-kicks awarded. Only three of Higuaín’s 36 goals came from penalties in 2015-16.

Does that diminish the achievement? For many, it will. Even if you were to discard penalties completely, however, he would still be Serie A’s top scorer this season on 21.

Whichever way you slice it, this has been an impressive campaign. Yet Immobile has been the first to criticise his own performances. As Lazio’s title challenge evaporated following the restart – with four defeats in their first five July games – he shared his frustration at not feeling able to get himself back in the zone. “The team plays for me,” he told the in-house radio station, Lazio Style. “I still have personal objectives to chase but I must not get myself nervous. Since lockdown, I have not been myself, I need to get back to being calm.”

These felt like telling remarks from a player who has been accused many times by his critics of lacking the steel to succeed at the highest levels. A player who successive Italy managers have looked to for leadership up front, but who has delivered only 10 goals in 39 appearances for the national side – and almost all of those against lesser footballing nations.

Is his simply the story of a “Goldilocks” footballer, one who needs a team set up just right to exploit his undeniable talents for timing a run, for finding space and for beating a goalkeeper one-on-one? Or is there another layer, hinted at again by his comments on Wednesday, of simply putting too much pressure on himself at times, of building a layer of unnecessary burden?

Immobile’s season for Lazio has been another brilliant one – regardless of whether Higuaín’s record falls. His goals have been supplemented with nine assists, including one for Correa against Brescia. Even as teammates fought furiously to force the ball to him in scoring positions, he continued to serve them as well.

You would be hard-pressed to find any colleague of Immobile’s who feels that he has let them down in the final part of this season. You would find many who are desperate to help him to claim his record on Sunday, and finish on a happier note. - Guardian