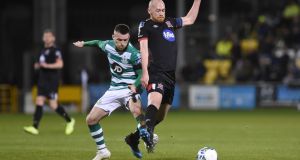 Dundalk’s Chris Shields and Jack Byrne of Shamrock Rovers vie for the ball during their clash before the shutdown. Photo: Ciaran Culligan/Inpho

The use of the asterisk in sport is said to date back to the 1961 Major League Baseball season when Roger Maris broke Babe Ruth’s record for home runs in a season. Because Maris had more games to do it in, the authorities reckoned a footnote would be required and it was a journalist’s suggestion to use the particular symbol.

There were times in the League of Ireland’s not too distant history when you might have wondered where we would have been without the New York Daily News’s Dick Young.

The asterisk will be back this season, that much we know already, and for those who end the shortened campaign disappointed for one reason or another, the opportunity to point at it next to the final league table will be swiftly availed of.

But however far short of an ideal season this one eventually ends up falling, it is still very good to be facing into the prospect of some competitive football being played again. After all that it has taken to get to this point, the hope is that is that it will not be further affected by any second wave.

If not, there might actually be the odd positive about it all for the spectators, most obviously that in a season containing half as many games as had originally been intended, quite a few more matches may feel like ‘six pointers’.

The introduction of streaming service ‘WatchLOI’ will be an interesting experiment and should yield all sorts of intelligence that is useful for the future. Those who have seen the dry run say that it looks good and with only tiny attendances allowed through the coming weeks, it will certainly serve an important immediate function. Whether it can really generate a significant return is another thing, however, with the viewing figures for many games on television having long cast doubt on the argument that there is a really substantial revenue stream that has to date gone untapped here. Here’s hoping, though.

The games will surely, as they have elsewhere, suffer from the lack of live attendances and perhaps previous patterns of home advantage will be similarly undermined.

There is little getting away from the fact, however, that finishing at the foot of the table may well feel very harsh on a side that would normally would have had a lot more time to get themselves out of trouble.

To go down in those circumstances will feel pretty rough, at least if they have not been cut well adrift by their rivals but clearly removing all risk of relegation would have been damaging to competition as a whole.

As it is, a glance at the current table suggests that Sligo Rovers and Cork City have most to worry about but it is still very tight and a look back on recent 10-team seasons would seem to indicate that 10 to 12 points could well be enough to avoid the automatic drop with 14 or 15 likely to be required to steer clear of a playoff.

There will be rather less margin for error among the two leading title contenders. Dundalk and Shamrock Rovers have lost just one game between them to date and what a game it was. The manner in which the Dubliners came from behind to beat the champions in Tallaght provided the best evidence yet that after so much building Stephen Bradley’s side now has the character required to go all the way.

We will find out for sure in the coming months. A Dundalk squad strengthened by the return of David McMillan and the addition of players like Stefan Colovic and Josh Gatt should set the bar high for anyone aiming to take their title away.

It is not the first time that Rovers have topped the table over the past season or two but they still find themselves chasing a first title since 2011. Among the hurdles to be overcome, if they are to win it now is a trip to Oriel Park in late September but there is, as always, a belief about the club and a disregard for the notion that any success this season is somehow devalued.

“We were in a strong position before it all stopped,” said Daniel Lafferty as he returned to full training a few weeks back, “and everything that has happened since has been completely out of our control. We wouldn’t class it as being devalued in any way, though.

“At the end of the season there might be an asterisk beside the table and an explanation at the bottom of it about why there were only so many games but if our name is on top of it then I don’t think anyone around this club will care.”