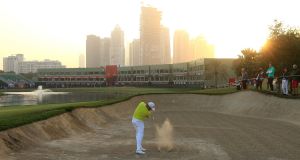 Jamie Donaldson of Wales hits his second shot on the 9th hole during round one of the Omega Dubai Desert Classic at Emirates Golf Club in Dubai, United Arab Emirates. Photo: Andrew Redington/Getty Images

Not much has gone right for Jamie Donaldson since the 2014 moment which will most likely define his career. It was the Welshman who delivered the winning point for Europe in that Ryder Cup edition, a superb wedge shot into the 15th at Gleneagles proving the stuff of fairytale. Harsh reality was soon to kick in.

Owing largely to injury problems which triggered an ominous downturn in form, Donaldson has recently found himself scraping around to retain European Tour status. How he justified that position in Dubai on Thursday, back to back nines of 31 placing the 42-year-old at the head of proceedings at the Desert Classic. A Donaldson recovery from current position of 292 in the world rankings may be imminent.

Donaldson later admitted the prospect of shooting golf’s magic number, 59, had been on his mind. “I knew what was on the cards out there,” Donaldson said. “I think I had five holes to go and started thinking about 59. But I mean, you can never be disappointed with 10-under, can you?”

Rory McIlroy’s actions continue to speak louder than words. The Northern Irishman may publicly insist victory is not essential before he makes another tilt at the career grand slam – at Augusta National in April – but McIlroy’s professional performance tells another story.

Meanwhile Ireland’s Paul Dunne also got off to a strong start, shooting an impressive 66 to sit a stroke behind McIlroy on six under par.

Dunne’s opening round was also bogey-free, and he made an eagle on the 18th – his final hole – to climb up the leaderboard.

Dunne is coming off the back of a disappointing final round last week in Abu Dhabi where he carded a 74 to slip down to a tie for 19th after being right in contention through three rounds. However, he put that right out of his mind in Dubai to card four birdies and that final hole eagle in a round that didn’t include a single dropped shot.

As for McIlroy, his opening round included just 65 shots and, for the third time in five rounds, not a single scorecard blemish. The sense that McIlroy is edging towards the tournament win which would boost his Masters claims and endorse dedicated off-season work is a live one. Context was supplied by the 28-year-old’s sentiments after day one at the Emirates Club, with McIlroy bemoaning missed chances on the greens and “disappointing” iron play.

“It was nice to get off to a good start,” McIlroy said. “That way you put yourself right in contention in the tournament straight away. That’s honestly one of my goals this year. I feel like I started off last year a little bit sort of 71, 70 instead of getting right into the thick of things from the start. So it’s been nice to start the last couple weeks this way.”

Despite his frustration regarding the missed birdie opportunities, McIlroy’s round did include 10 single putts. A newly-introduced and deliberate pre-shot routine when the four-times major champion has putter in hand looks to be paying dividends. McIlroy has also reintroduced a policy of line-marking his ball to assist with alignment.

“I’m going to be very disciplined with using the line on the ball,” he said. “It makes it easier for me to line up better and frees me up in terms of making a good stroke. I started using it a little bit in 2014. Actually I had my best ever putting round on the PGA Tour using the line, it was the first round at Memorial in 2014. It’s always been something I’ve been in and out of but I feel like I putt my best with it, so I want to be consistent with it now.

McIlroy rightly acknowledged benign Thursday morning conditions which contributed to generally low scoring. David Horsey had charged into the lead courtesy of a 63 – a score later matched by Anthony Wall – before Donaldson’s heroics.

Thomas Pieters, Chris Paisley, Lasse Jensen and Alexander Björk are alongside McIlroy at seven under par. Sergio García, the defending champion, opened with a 67. Ian Poulter delivered a 68 but Danny Willett’s woes continued. The 2016 Masters champion, who has been beset by shoulder troubles recently, reached the turn in two under but was to finish seven, eight before signing for a 77.

Completing the Irish contingent in the field are Graeme McDowell and Darren Clarke who carded rounds of 72 and 75 respectively. – Guardian service