Rory McIlroy edged out by Haotong Li in the desert 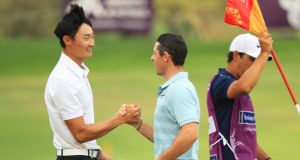 With eight holes of the Dubai Desert Classic to play, the storyline was set. Rory McIlroy, back at the scene of his first victory as a professional and in the early throngs of what he regards as phase two in his golfing life, led by two from Li Haotong. Two hours later, dejection was writ large across McIlroy’s face as Li celebrated the finest win of his fledgling career.

First, to the victor. Li played the event’s final six holes in four under par - and birdied the last two - in what proved a wonderful display of nerveless golf. His winning aggregate of 23 under par is a Desert Classic record. With McIlroy looking on and therefore in a position from which others would have wilted, Li converted from 10ft at the last to take the trophy by one. His Sunday 69 matched McIlroy’s scorecard.

Li was already in this year’s Masters and would do well to look at quirks of recent history. The previous two winners of this tournament went on to prevail at Augusta National little over two months later.

“This is incredible and gives me so much confidence,” said Li. “Especially after I missed the cut last week. I just want more of this in the future. It was incredible to play with Rory and learn so much from him.” And to come out on top, presumably.

Focus will inevitably fall on the wounded McIlroy. His post-round assessment of being “pissed off” was barely necessary. This one stung all right, to the point where McIlroy obviously had little interest in accentuating positives.

“If someone had of told me at the start of the year “You’ll finish third and second your first two events’ I’d say, “Yeah, I’d take that,’” McIlroy said. “But being in the positions I’ve been in and having two close calls the first couple of weeks of the year, it’s a little difficult.

“The competitor in me is very disappointed right now. I wanted to win. I always want to win and I just didn’t do enough when I needed to.”

There has been so much to admire about the four-times major champion’s return to competitive action during two Middle East events as played in 40 under. In the cold light of day, this represents a strong start to McIlroy’s latest quest to become the Masters champion, not least after a period seriously disrupted by injury.

Still, what sustains golfers of McIlroy’s standing is tournament glory. Having apparently swatted aside the challenge of Li, the 28-year-old produced arguably his worst shot of the week when finding a greenside bunker at the short 11th with only a nine-iron. A bogey was to follow. McIlroy was again profligate with short iron in hand at the par five 13th. He was to three-putt in passing up a glorious birdie opportunity. McIlroy’s bogey on 16, a hole he commonly plays so well, was damaging in context of Li’s stunning resurgence. Key to the latter scenario was a birdie putt holed from off the 15th green.

“From being two ahead, standing on the 11th tee to being level going into 16, it was a couple of bad shots, a couple of poor decisions, a couple of mental errors, a few tentative putts out there, as well,” McIlroy added.

“I kept leaving myself in places where I couldn’t really give it a run at the hole because they were downhill, down grain, downwind. So I didn’t really leave it in the best spots to be aggressive with my putts.

“I tried until the very end, made him win it in the end, which was all I could do, and he played very well on the way in, birdieing three of the last four. I just wish I could get a couple of those holes back.”

Tyrrell Hatton had reached the 18th with aspirations of gatecrashing the championship party, only to lash his second shot into the pond. Hatton was to finish third at 20 under, one ahead of Alexander Levy. The biggest move on day four arrived from Scotland’s Richie Ramsay, who claimed a share of sixth courtesy of a 64.