Rory McIlroy closing in on lead in Dubai as play suspended 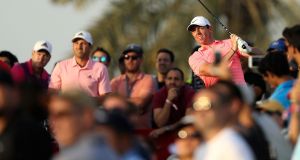 For a Friday spell, it looked as if only the weather might halt Rory McIlroy’s charge towards another Dubai Desert Classic win. Instead, the 8th hole was to provide an end to the Northern Irishman’s bogey-free run in this event.

McIlroy must return at 7.30am local time on Saturday to complete the final seven holes of his second round, owing to a three-hour fog delay here on Friday. He will resume at 10 under par, only three from the lead, and still very much the man to watch.

“I don’t mind,” said McIlroy of his situation. “It will probably be a good test for me to play 25 holes tomorrow and see how the body responds to it. Maybe I can get a bit of early momentum going and keep it going into the third round.”

For Paul Dunne it was a disappointing follow-up to a good opening round as he slumped to a round of 74 to slip back to four under for the tournament. After bogeying the 10th – his opening hole – after his ball cruelly plugged right in the face of a greenside bunker, the Greystones man got back on track with birdies at the 13th and 15th but things turned ugly on the back nine as he carded three bogeys and not a single birdie to slip down the leaderboard.

The 24-year-old now sits right on the projected cut and will have to wait until second round play finishes in the morning to know if he has made it.

It’s a similar story for Graeme McDowell who is also at four under but he will certainly be the happier of the two after carding no bogeys and four birdies in a round of 68 to give himself a chance of making the weekend after his first round of level par.

Jamie Donaldson was content not only to remain at the head of affairs but complete his second round, thereby allowing a Saturday morning lie in. Donaldson, who had opened with a stunning 62, moved to 13 under courtesy of a 69. The Welshman is, for now, proving less is more after a Christmas break far removed from the golf scene.

“I took a couple months off and didn’t really hit a ball,” Donaldson explained. “We play golf, so much golf, all year. I’ve got two young kids; it was time to have some family time with them for a couple of months and it was great.

“Come out for the season nice and fresh and you’re reacting more to what you’ve turned up with, as opposed to slogging yourself to death over the winter.”

Donaldson leads Haotong Li – who has posted successive 66s – by one. Branden Grace is a stroke further back.

Leaderboard surprise has been provided by the 54-year-old Miguel Ángel Jiménez, who is now more accustomed to competing for senior trophies than at mainstream events such as this. The Spaniard sits at 10 under after a second round of 68. Jiménez even double-bogeyed the par-three 7th.

“I won here in 2010, this is a golf course where I feel like I can defend myself with my game and here we are,” Jiménez said. “I still like to play with the young boys.”

And Jiménez’s post-round plans? “I’m going to finish my cigar, have a small nap and I’m going to have a beautiful bottle of wine tonight.” It felt like a fully deserved scenario. – Guardian service