Tiger Woods fights back to make the cut at Torrey Pines 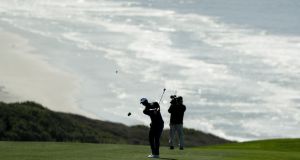 Tiger Woods hits from the fairway on the 16th hole hole of the North Course at Torrey Pines Golf Course during the second round of the Farmers Insurance Open in San Diego. Photo: Gregory Bull/AP Photo

One round does not a comeback make but if anything can be read into Tiger Woods’ second round at the Farmers Insurance Open at Torrey Pines, it’s that he hasn’t lost an ounce of the desire or fight that, in the ever more distant past, saw him dominate the game of golf.

The spirits of success follow Woods around the cliff-top California course where he has won eight times – including the 2008 US Open – and he used all of that guile and experience to claw himself back from well outside the cut mark and secure a place for the weekend action, thanks to a three-under par back nine.

Tempered expectations were a feature of the build-up to Woods’ latest return and, while making his first cut on the PGA Tour in 888 days won’t be too far up his list of achievements when all is said and done, it is undoubtedly a small victory. Particularly given that he was unable to do exactly that in this event last year before withdrawing from the following week’s Dubai Desert Classic and then disappearing for 10 months to undergo spinal fusion surgery.

Woods – who in the past always made a point of declaring that he was at a tournament for nothing less than a win – had spoken earlier in the week about simply wanting to get back to tournament sharpness with an eye on building towards April’s US Masters. And it’s that sharpness that will indeed need working on, as already evidenced in his opening round of level par, 72 and furthermore on Friday when he took 71 blows – some good, some bad, some indifferent – to get around the historically easier North Course. But those 71 shots were enough to leave him on a one under par total of 143, making the cut with nothing to spare.

“I just fought hard, it’s something I’ve done for my entire career and this is no different,” Woods said after his round.

“It was tough out there, the greens were firm. We were talking about some of these pin locations and they were hard to get at. It’s been a long 12 months, I’ve been away from it for a very long time. It’s just nice to get out there to compete and play. Hopefully I can be around for the weekend.”

For Ireland’s Shane Lowry the fortunes couldn’t have been anymore contrasting as he capitulated completely to fall from comfortable position not too far behind Ryan Palmer – who tops the leaderboard at 11 under par, one clear of defending champion Jon Rahm – to three over par and a weekend off with a missed cut chalked down for his first start of the season.

At four under par for the tournament for his first eight holes on Friday, Lowry suffered a putting disaster that started on the par five 18th – his ninth – where he three-putted a birdie chance to wind up with a bogey. From there it went from bad to worse as he wound up with a double bogey at his 10th and three more consecutive bogeys afterwards, including another three-putt, to drop six shots in five holes. A further bogey followed at his 16th hole, capping off a disappointing day for the Offalyman which saw him come home in 42 shots for the back nine and card a 78.

He was joined in missing the cut by Pádraig Harrington who carded five birdies, three bogeys and a double which eventually added up to a second consecutive round of level par. After three bogeys in his opening six holes, Séamus Power pulled a shot back with a birdie at the ninth and needed four pars in his last four holes if he was the make the cut on the mark. However, a bogey at the last put paid to that meaning that all three of the Irish contingent will not feature at the weekend.

At the top of the leaderboard, 23-year-old Rahm could be set for the biggest weekend of his career as he aims to defend his title, make it back-to-back wins after capturing the CareerBuilder Challenge at La Quinta last week and displace Dustin Johnson at the top of the world rankings. The Spaniard is the hot favourite to do so after his round of 66 which will see him partner Palmer in the final group on Saturday.

But, as it always is when he tees it up, Friday was all about Tiger at Torrey Pines.

Starting at the 10th on the North Course, Woods missed a good early birdie chance at the Par 3 12th after fizzing a mid-iron shot right over the pin. And he would go on to rue that missed opportunity on the very next hole.

After pulling his drive into the hazard on the left of the 13th – a feature of his play this week, seen in his opening tee shots on both days – he eventually wound up with double bogey to slip back to two over par and three outside the projected cut mark of one under.

However, the fight is something the former world number one will never lose and he showed it on his back nine. After coming up short of the first green he proceeded to roll in his 40 foot birdie putt to get back to one over and instil some confidence on the greens which was sorely missing on Thursday as he failed to make a putt longer than 4’2”.

Another birdie came at the Par 5 fifth, leaving him at level par and one shot outside the cut mark with four holes to play. A par followed at the sixth but perhaps it was that par which he will look back on as a key moment. With his swing unravelling and tee shots flying left and right, it was Woods’ short game that saved him – something particularly pleasing for him given that this course was the scene of his 2015 walk-off mid-round when he looked to be struggling with a nasty case of the chip yips.

After driving right and punching out, Woods lofted a perfectly clipped wedge shot in to kick-in distance for a crucial par save to leave him with a chance of making the cut. Buoyed by that he took a crack at the green on the drivable Par 4 seventh, missing the green left but, again, he had his wedge to thank as he coaxed a chip down to three feet and holed out for birdie. From there two pars would do it but it wasn’t going to be that easy.

A poorly struck iron shot at the Par 3 eighth left a tricky chip up the green which failed to grab, rolling out to the back fringe and resulting in a bogey four. Now the pressure was on and Woods needed a birdie at the last – thankfully for him a Par 5.

After missing yet another fairway to the right – Woods hit just three out of 14 fairways and missed nine greens in regulation on Friday – he muscled a six-iron up to the middle of the green and expertly lagged a 70 foot eagle putt down to a few feet before holing out for birdie and breathing a major sigh of relief.

Yes, it’s a long way from the heights the 42-year-old has scaled in the past, but it’s a start.

1 Sideline Cut: Vignette shows why Bird is the true shark in The Last Dance
2 Sonia O’Sullivan: How to keep your competitive edge from going blunt
3 Philip Browne admits funding model for Irish rugby is not sustainable
4 Coming fourth in the Olympics didn’t change this fearless quartet, time did
5 Dave Hannigan: Trump gets the clubs back out as death toll keeps rising
Real news has value SUBSCRIBE