Out of Bounds: Maguire, Meadow and a Major week for Irish golf 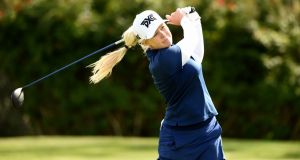 I don’t care which way you look at it. Upwards, downwards or even with a sideways glance, but this is a seismic week for Irish golf.

For the first time ever, two Irish professional women golfers will compete in a Major championship; and for Leona Maguire and Stephanie Meadow, their participation in the US Women’s Open at the Country Club of Charleston in South Carolina provides the greatest proof of the work that has been done on the ground by the Irish Ladies Golf Union in identifying and then nurturing young talent. It also shows how well they have each embraced the challenge of tour life.

Maguire and Meadow have both waved goodbye to the amateur ranks which prepared them for the journey into the professional game, both enjoying brilliant college careers in the United States, but - as in most areas of golf - it is the professional game which hogs most of the spotlight and the pair find themselves in the full glare of the biggest championship (certainly in monetary terms) in the women’s game at the US Open.

For Maguire, who is playing primarily on the Symetra Tour, where she currently leads the order of merit with two wins already this season, and for Meadow, who graduated from that same circuit last year and who is plying her trade on the LPGA Tour this season, this week is truly major in so many ways.

The US Women’s Open has a record purse of $5.5 million, with the first ever payday of $1 million for whoever manages to lift the Harton S. Semple Trophy come Sunday’s conclusion, and Maguire and Meadow have earned their places in the 156 player field having come through sectional qualifying with some aplomb.

Although Maguire has played in five career Majors to date, this is a first time as a professional for the 24-year-old from Co Cavan. Meadow, meanwhile, made an immediate impact on her professional debut at the US Open in 2014 when she finished third behind Michelle Wie at Pinehurst.

Maguire’s upward trending since turning professional just 12 months ago has been impressive. Ranked 614th in the world on June 4th 2018, she has progressed steadily and currently is ranked 177th in the world. Meadow is ranked 298th.

But those world rankings don’t adequately reflect the pioneering roles the two are playing with regard to their journeys onto the biggest of professional stages and what they are doing in leading the way for future generations of young Irish golfers. Where their role models growing up were the likes of Pádraig Harrington and Darren Clarke, they are now providing girls with genuine female role models to follow.

So, the two - who both represented Ireland at the 2016 Olympics in Rio and who are set to also play in next year’s Games in Tokyo - continue to be game-changers.

And none more so than at this week’s championship, where Maguire and 27-year-old Meadow will bring their shot-making and own expectations to a Seth Raynor-designed course, with its imitations of the Road Hole on the Old Course and of the Redan at North Berwick, aiming to write their own scripts.

The Lowdown: US Women’s Open

The course: Designed by Seth Raynor, the course - 6,535 yards Par 71 - features large plateau greens averaging 8,000 square feet protected by steep banks and larger bunkers. The greens are tiered which means players and their caddies will need to have their homework done in ensuring approach shots find the desired level. The course features 99 bunkers, which places an emphasis on strategic shot-making . . . and patience.

Talking point: The generation game is highlighted by the presence of 55-year-old Laura Davies, making a record 28th appearance in the championship, along with 14-year-old American Alexa Pano. Inbee Park is chasing a third US Open win (having previously won in 2008 and 2013) while Ariya Jutanugarn is the defending champion.

Irish in the field: Leona Maguire, making her professional debut in a Major, and Stephanie Meadow came through sectional qualifying. Maguire has been grouped with Davies and Karrie Webb (6.29pm Irish time first round), while Meadow is grouped with Esther Henseleit and Marissa Steen (1.39pm Irish time).

Betting: World number one Jin-Young Ko - winner of the ANA Inspiration last month - is the undisputed favourite at 9/1 with Minjee Lee next in the market at 12/1. Upward trending Spaniard Carlota Ciganda is available at 20/1, while Leona Maguire (150/1) and Stephanie Meadow (300/1) might be worth an each-way look at those prices.