McIlroy and Johnson were among players who considered US Open boycott, report 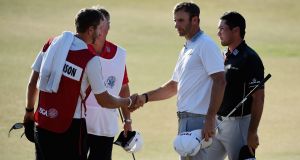 Dustin Johnson on the 18th green after his final round at the 2015 US Open at Chambers Bay in Washington state. Photograph: Ross Kinnaird/Getty Images

Rory McIlroy and Dustin Johnson were among the players who considered a boycott of the US Open, according to a report in Golf Digest magazine.

The tournament has been beset by problems in recent years and tournament organisers the USGA admitted they went “too far” with the set up of Shinnecock Hills last year after only three players broke par in the third round.

In 2015, the greens at Chambers Bay were likened to “putting on broccoli” by Henrik Stenson and Gary Player felt the course was designed by “a man who had to have one leg shorter than the other”.

But it was the bizarre rules decision – or rather indecision – which left the eventual winner Dustin Johnson, other players, officials and spectators unsure of what his score was with just seven holes to play in 2016, which reportedly prompted talk of a boycott.

“We had about 10-15 guys who were willing to sit out after 2016,” Golf Digest quotes a winner of multiple PGA Tour titles as saying. “Some of them were big names – Dustin was one, Rory was another.”

A player identified as a Major champion and former world number one is quoted as saying: “I was prepared to do it. Absolutely.”

Players spoke to the magazine on condition of anonymity, and another added: “I figure we needed about 25 guys, and I think we could have gotten there based on what I was hearing from players.

“Really, just one would have done it, but Tiger [Woods] wasn’t playing at the time. Without us, they [the USGA] don’t have a tournament.”

Players were also dissatisfied with the distribution of money from the USGA’s television deal with Fox, which began in 2015.

A winner of several PGA Tour titles is quoted in the article as saying: “I still don’t know where \[all the additional money from Fox] goes. I’ve tried a thousand times to get an answer.

“The USGA is making about $100 million (€90 million) a year that we know about, that’s just US TV revenue, not international TV money, merchandise and sales and so on.

“If you can show us how you’re using that money to grow the game, we’d be all about it. But they haven’t shown us that.”