Na doesn't Dodge his commitment to caddie after win, Maguire in Major company 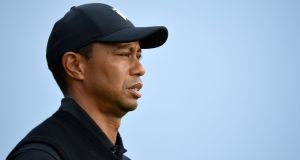 Tiger Woods: has been a five-time winner of the Memorial tournament at Muirfield Village. Photograph: Stuart Franklin/Getty Images

The big cat is back on tour this week, as Tiger Woods returns to a happy hunting ground at the Memorial tournament at Muirfield Village in Dublin, Ohio in his bid to equal Sam Snead’s PGA Tour record of 82 victories.

Woods – unwell at the US PGA, where he missed the cut – is a five-time winner of the Memorial, a tournament hosted by Jack Nicklaus. It will also give the 15-times Major champion a chance to get a scorecard back in his hands before the upcoming US Open at Pebble Beach.

“I’ve enjoyed being the Masters champion again and the PGA was a quick turnaround and unfortunately I just didn’t play well. I didn’t do all the little things I need to do correctly to post good scores and put himself in position to shoot good scores,” said Woods of his US PGA disappointment.

“There’s no reason why I can’t get up to speed again and crank it back up,” said Woods, who has recovered from the illness which affected his preparations and play at Bethpage.

Rory McIlroy, yet to include a Memorial title among those tournament wins on his CV, also returns to action in the Memorial, which will kick-start a three-week stretch that also takes in next week’s Canadian Open and the following week’s US Open. The Irishman didn’t play the week before either the Masters or the US PGA and has adopted a different approach for the season’s other two Majors, pencilling in tournament action ahead of both the US Open and the 148th Open at Royal Portrush.

Na’s generous gesture
Kevin Na scooped a payday of $1.3 million for his win in the Charles Schwab Challenge at famed Colonial on the PGA Tour . . . but also (briefly) earned himself a bonus of a restored 1973 Dodge Challenger, which he promptly gave to his veteran caddie Kenny Harms after a pre-tournament pact between the pair.

“Oh, wow, that car is beautiful,” said Na, who had a four-stroke winning margin over Tony Finau.

Charles Schwab, sponsoring the tournament for the first time, came up with the idea of presenting the winner with a ’73 Dodge as that was the year the company was incorporated. The restored car has a vintage body in a custom Glacier Blue paint, with one-off Schwab badging and Scottish tartan on the seats, a tribute to awarding a tartan plaid jacket to the winner. Na, by the way, kept the jacket for himself.

By the Numbers  - 11
Leona Maguire has been given a rather special grouping for her debut appearance as a professional in the US Women’s Open at the Country Club of Charleston: the Co Cavan golfer has been drawn to play with legendary players Laura Davies and Kerrie Webb for the first two rounds. Davies and Webb have a combine 11 Major victories between them. Davies, who is 55-years-old, has won four Majors in a stellar career while Australian Webb has seven career Majors.

Stephanie Meadow, who has also qualified for the Major, is grouped with Germany’s Esther Henseleit and American Marissa Steen for the opening two rounds in South Carolina. It is the first time that two Irish professionals will be playing a women’s Major.

Word of Mouth (I)
“To say it’s a dream come true may be an understatement” – Ken Tanigawa on completing a remarkable return to professional golf, with victory in the PGA Senior Championship. The American returned to professional golf in 2018 after a 15-year absence from life on tour.

Word of Mouth (II)
“I’m young. I live and I learn” – rookie professional Robert MacIntyre on following up a runner-up finish in the British Masters with another second place finish in the Made in Denmark tournament. The 22-year-old Scot has moved up to 13th in the latest Race to Dubai rankings and has improved to 123rd in the official world rankings, having started the year in 247th.

Twitter Twaddle
Great week @MiDGolf and happy with T-4 moving in the right direction. Danish fans this week were amazing and the atmosphere was one of the best of the year @EuropeanTour Thank you Denmark for another great event! #Mid19 – Paul Dunne following his fourth place in Denmark.

First round of golf today since last week at Bethpage. No hybrids/7W hit for 2nd shots on any par 4s, rode in a cart and the beer cart was available on 4 different occasions!! Glorious!!! – Sky Sports commentator Rich Beem on returning to social golf after his once-a-year appearance on tour in the US PGA.

Great morning of golf with Prime Minister @AbeShinzo at Mobara Country Club in Chiba, Japan! - US President Donald Trump manages another round of golf on his travels.

Know the Rules
Q
In searching for his ball in an area where fallen leaves have accumulated on the ground, Player A accidentally kicks his ball which moves a number of feet from its original spot and also causes leaves to disperse. What should he do?

A
Under Rule 7.4/1, Player A should estimate the original spot by considering all reasonably available evidence about where the ball was located before it was moved. In replacing the ball, the player is not required to replace the leaves which were moved since loose impediments are not part of the lie and, in many cases, it would be impossible to reconstruct the original situation if loose impediments were required to be replaced.