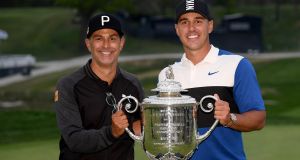 Brooks Koepka’s performances in the Majors, four wins in his last eight appearances, is all a bit mind-boggling...but the 29-year-old American – with Pebble Beach and then Royal Portrush next on his hit list – doesn’t intend stopping any time soon.

And neither does his caddie Ricky Elliott, who will bring a bit of local knowledge to that quest for a claret jug when Koepka – who has returned to the world number one spot following his successful US PGA defence – goes in search of more Major glory.

“Ricky knows the golf course. I mean, he grew up two minutes from there. He should know where to hit it. I’m excited to get over there. I’ve never been to Ireland, which is shocking because I’ve been all over the world. I’m looking forward to going. It will be special for him, and it will be special for me,” said Koepka.

Koepka’s latest Major win, becoming the first player to simultaneously win back-to-back US Opens and US PGAs, was historic, but he intends to keep playing with a chip on his shoulder.

“There’s always a chip. I think every great athlete has a chip, whether it be somebody saying you can’t do something. It doesn’t matter. You look at Michael Jordan, I’ve heard him talk about having a chip on his shoulder, and I think that’s important. It works for me. Why should I stray from that?

Elliott has been by Koepka’s side through each of his four Major wins, having first worked for the American – then playing on the Challenge Tour – at the US PGA in Oak Hill in 2013 when the player’s coach Claude Harmon asked him to fill in. They’ve been together ever since.

“It is incredible. He is one of my best friends as well and just to see him do this and be able to walk up the last hole in a Major and winning Majors. I was a massive golf fan growing up, and to be right beside the number one player in the world and winning four Majors is just a dream come true,” said Elliott.

“When the cop started turning around and yelling, ‘get back, get back’, it’s kind of hard not to turn around and see what’s going on” – Brooks Koepka on his reaction to the crowds breaking through the ropes on the 18th hole.

“I thought it was pretty weird how [fans] were telling Brooks to choke. That’s not my cup of tea. I was pulling for him after that. I have a few choice words for that” – Harold Varner III on his distaste of the crowd roaring chants of “DJ, DJ” at Koepka when he was playing his shots on the homeward run.

“I’ve worked seriously hard for this. I’ve gone from absolutely nothing to finishing third at a Major. All in five years. I can’t tell you the exact reason, but there is something – my heart, my head" – Matt Wallace, who has moved up to 25th in the world rankings. Wallace was ranked 1,672nd and playing on the developmental Alps Tour in 2015, before working his way on to the Challenge Tour and then the European Tour, where he is a three-time winner.

She’s done it again and I couldn’t be happier!! 2nd win on @ROAD2LPGA this season for Leona_maguire This girl is a born winner – singer Niall Horan, and founder of Modest Golf, on Maguire’s latest success.

Happy with my week at Bethpage especially after Thursday. Great to have this man walking around with me for the few days. The great David (shaper) Reynolds who caddied for me this week 10 years ago to the Irish Open…. – A decade on from his Irish Open win as an amateur, Shane Lowry on having his caddie for that triumph out supporting him at Bethpage.

What a win for @BKoepka No reason to compare to TW, any of the greats, anything… respect this insane run he’s on and applaud him for it. Conrgats bro – Justin Thomas, who missed the PGA through injury, tipping the cap to Koepka.

IN THE BAG – Brooks Koepka, US PGA

Player A, in a strokeplay event, pushes his tee shot so that the ball finishes under a tree. Before playing his shot, he breaks tree branches, improving the conditions affecting the stroke, but then decides the ball is unplayable and drops a ball within two club lengths but then breaks more tree branches. What penalties has he incurred?

The upshot is a total of five penalty strokes: the player gets two separate two-stroke penalties under Rule 8.1a for improving conditions affecting the stroke by breaking the tree branches, and he also receives a one-stroke penalty under Rule 19.2c (unplayable ball relief).