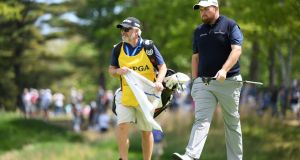 Shane Lowry has added the Canadian Open to his schedule as he build up to the US Open at Pebble Beach. Photograph: Ross Kinnaird/Getty Images

The first thing he did on returning home last week? That’d be heading for the shops to buy some Superquinn sausages. But Shane Lowry’s homecoming, back in Dublin having being based in West Palm Beach in Florida for the past three months, won’t mean an extended stay this side of the Atlantic as the 32-year-old Offaly man gears up for his next Major assignment in the US Open at Pebble Beach in a fortnight’s time.

Lowry – who was conferred with honorary life membership at Co Louth Golf Club on Monday, the scene of his remarkable win as an amateur in the Irish Open 10 years ago – has added next week’s Canadian Open on to his schedule to sharpen his competitive game ahead of the US Open while he also has eyes on other big tournaments coming up, among them the DDF Irish Open at Lahinch and the 148th Open Championship at Royal Portrush.

Indeed, Lowry intends to get some advance prep work done at Lahinch later this week while he has factored in a reconnaissance trip to Portrush once he gets home from Pebble Beach.

Coming off a top 10 finish in the US PGA Championship at Bethpage, Lowry – currently third on the European Tour’s Race to Dubai order of merit and 41st in the updated world rankings – is more aware than anyone of trying to make that breakthrough in the Majors.

“The first question anyone asks is, ‘when are you going to win a Major?’ . . . and, if I win one, it’s not lucky, because I know I have the ability,” said Lowry. “But you only play four a year. I personally believe that, at my level of golf, I don’t peak for the Majors. The top players have been trying to do that for years and they can’t figure out how to do it. Only one person can win. And the top level of world golf is unbelievably strong. So if you get one of them on their A Game, they are very hard to beat.

“I look at the top end, the top 10 in the world is as good as it has ever been. I didn’t see it back in the day when those lads [Jack Nicklaus, Arnold Palmer etc] were around but I don’t think I am in that category. I think I am a level below, I feel like I belong in the big tournaments and belong playing against the best players.

“I don’t fear any of the top players in the world but I do respect they are the best and when I play practice rounds with Rory [McIlroy] and Dustin [Johnson] joins you, you do see how good they are. And they are good [but] if I get head-to-head with them I won’t be afraid of them and that’s how I feel about it.”

Although he has played in the past four AT&T Pebble Beach pro-ams, Lowry is expecting an entirely different course and set-up for the US Open.

“It is going to be, I imagine, more strategic than it is in the pro-am. In the pro-am you just hit it a belt and go down and find it and you generally don’t have too bad a lie.

“I imagine it is going to be firmer and faster. Those greens, I have actually played them once [firm], they got firm for the final round of the pro-am once and I couldn’t believe how hard the course was. When those greens get firm they are very small. I think there won’t be a whole lot of drivers out there, there will be a big emphasis on good iron play and distance control that week, which I generally do okay with.”

Based back in Dublin for the rest of the year, Lowry’s immediate plans feature a two-week stint back across the Atlantic for the Canadian Open and the US Open and then a short break before the DDF Irish Open, a week off (missing the Scottish Open) and followed by the Open Championship in Portrush before returning for another stint Stateside that will take in the WGC in Memphis, the Wyndham Championship and, after that, his schedule will depend on whether or not he qualifies for the FedEx Cup playoffs.