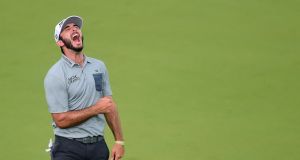 Golf is a four letter word but, if we’re honest, it doesn’t always feel the love.

It doesn’t, and can’t possibly generate the passion of team-centred sports. Look at the love thrown Liverpool’s way (even by non-Reds!) Or what will likely come Leinster’s way this weekend. Or, indeed, for any number of Gaelic teams, football and hurling, entering the championship fray in the coming days.

By its very nature, golf is a singularly selfish sport where the top players are sole traders and where the word “team” involves their caddies, swing coaches, putting gurus, psychologists, masseuses, family members et al.

Only rarely, at the biennial Ryder Cup and Solheim Cups, do professional golfers get any hint of what it must be like to be part of a team; to experience what it is like to lean on others or for others to lean on them, to share unbridled sporting passion. For the greater part, it is all about “me, me, me.”

As the big cat himself might put it, “it is what it is.”

But isn’t there also a responsibility for the top players to engage more with fans? You can see that Rory McIlroy is trying hard. On the way to the first tee in the final round of Sunday’s Wells Fargo Championship, the Northern Irishman pressed the flesh with outstretched hands of spectators. I counted: one-two-three ... 20! That’s decent engagement. Yet, McIlroy’s rules of engagements are more the exception than the rule.

Thanks to Tommy Tiernan, viewers of RTÉ the other night were given a terrific insight into Lowry’s down-to-earth nature and humour ... the talk about the bridge in Clara et al ... but Lowry’s background was very much that of being a team player (All-Ireland winning dad) and that has clearly rubbed off on him.

Funnily enough, it was a cast of so-called lesser players last weekend who provided some hope for future. One was Joel Dahmen, a cancer-survivor who wears a bucket hat; the other was Max Homa, the man who beat him to the title at the Wells Fargo. Homa, if you didn’t know, is a Game of Thrones fan. Followers of his twitter account will know that. But they’ll also learn that he’s a funny guy.

Golf, for the most part, is not a team sport and can’t possibly bring the obsessive love that devotees of Liverpool, Leinster et al throw the way of those teams; yet there was clear and obvious love headed in the direction of Lowry and of both Dahmen and Homa. Perhaps, there is hope after all!