Out of Bounds: less is more on Tiger Woods’ return to the top 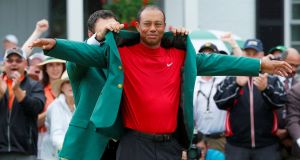 Tiger Woods is yet to return to action following his win on the US Masters at Augusta. Photograph: Bryan Snyder/Reuters

In golf, the numbers game is all about getting the lowest score. That’s how you win. But the old adage of ‘less is more’ has taken on a rather different meaning with how players are strategising their playing itineraries in the revamped, condensed season that has kicked in on the men’s professional circuit this year.

With one Major fitted into the calendar every month from April until July, when the British Open at Royal Portrush will bring down the curtain on the four biggest championships, players have had to reassess where and when they play. Unsurprisingly given his impact on the sport, Tiger Woods’ modus operandi has drawn most focus of all.

Woods’s win in the Masters was just his sixth outing of the year and he won’t play again until he tees up at the US PGA Championship at Bethpage Black on New York’s Long Island in two weeks time, for what will be only his seventh appearance of 2019.

The ‘less is more’ approach is clearly working, even if it has been forced on him by the demands of his body.

Even when fully fit, though, Woods was never one to play too frequently on tour; he was always one to pick and choose his tournaments.

Let’s take Rafa Cabrera-Bello as a comparison, a player who adopts a rather different approach: the Spaniard is something of a globetrotter when it comes to playing tournaments and is more often on the road than at home. In 2017, for instance, he played in 31 tournaments; in 2018, he teed up in 29; and, so far this year, he has played 11 times.

Yet, for all his globetrotting, Cabrera-Bello has won only five times professionally in his career. Which makes you wonder if he’d be better off reducing his tournament schedule and adopting the ‘less is more’ approach?

Woods’s return to winning ways in the Majors has provided a massive fillip to golf, most notably to the upcoming US PGA which has moved from its traditional August date to the new slot in May and, on the back of his win in the Masters, has made it a sell-out. As the PGA of America’s CEO Seth Waugh acknowledged, Woods’ impact was “sort of the moon landing . . . (it was) ‘where were you?’ kind of stuff!”

It’s not rocket science to know that Woods’ move back to the top is good for golf; yet his slim playing schedule, targeting the Majors, which will take him to Bethpage, Pebble Beach and finally Portrush in the coming months, means sightings of the big cat will be of his own time and choosing. In his case, less is most definitely more.

United slip up in top four race; reasons to be cheerful for Munster 07:00
Solskjær says Man United did not deserve to beat Southampton 06:36
Gerry Thornley: Munster will make for interesting case study when rugby resumes 06:30
James McClean says he gets no support for abuse he receives 06:34
Different Strokes: Day looks in the mirror and sees the light 06:00
Here is your handy guide to sport on television this week