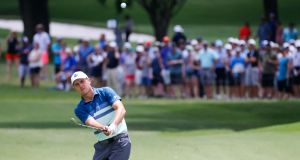 There’s a fair chance that when Joe Connolly totted up his team’s points from the Charles Schwab Challenge and the Made in Denmark tournament that he’d have anticipated his team taking a nosedive on our overall leaderboard.

Having spent the first five weeks of the competition in top spot, before slipping in to second last week, a paltry enough tally of 370 points was surely going to result in them plummeting.

So much for that theory – instead Joe’s Masters Swingers are back up to first.

“There’s always someone worse off,” as they say, and as it proved, seven of last week’s top 10 fared worse than Masters Swingers in the two tournaments. That was largely down to the fact that the bulk of the most-transferred-in players for week seven had tournaments they would very much like to forget.

Out of the 10 most popular players in action, four missed the cut (Jon Rahm, Rickie Fowler, Lucas Bjerregaard and Xander Schauffele), five finished outside the top 30 (Justin Rose, Francesco Molinari, Corey Conners, Matt Wallace and Graeme McDowell), with only one, Jordan Spieth, producing any kind of result of note, a share of eighth place in Texas.

And it was his captain Spieth who rescued Joe, although after that opening round of 65 he might have hoped for better than a slice of eighth.

But with three of his players taking the week off, two more missing the cut, thereby cancelling out the combined 20 points earned by Rose at the Charles Schwab Challenge and Thomas Detry in Denmark, Spieth ended up earning Masters Swingers’ entire 370 points total.

Spieth was also Hazel Sheridan’s top earner, but a lowly 41st place finish from her captain Wallace, the defending champion in Denmark, was partly responsible for her StarGazers earning just 205 points overall, which resulted in her relinquishing the lead and dropping to second.

Ailbhe O’Riordan, up from fifth to third, and Aine Belton, up from seventh to joint fifth, were the only top 10 managers to outscore Joe, nobody more happy to see the back of week seven than Aisling Smyth whose players combined to earn her a less than mighty 10 points, the chief culprit being her cut-missing captain Rahm.

Mind you, Nigel Oglesby didn’t have all that happier a time of it, his No Collusion line-up winning just the 40 points, captain Rahm, again, the main offender.

Again, though, there’s always someone worse off – spare a thought for Mary Mannion whose Trysome de Shampoo collected the grand total of zero points in week seven, resulting in the team sliding from 19th to 35th overall.

Bernd Wiesberger’s victory in Denmark benefitted less than one per cent of our teams but Kevin Na’s triumph in Texas proved a bit more popular, just under nine per cent having him on board for the third PGA Tour victory of his career.

David Barry was one such manager, Na’s points haul along with that of the player who finished second to him, David’s captain Tony Finau, put him on his way to the highest score of the week, 1,605 points.

Next up is The Memorial in Ohio where seven of the world’s top 10 will be in action – Rose, Rory McIlroy, Tiger Woods, Justin Thomas, defending champion Bryson DeChambeau, Schauffele and Fowler – with only Brooks Koepka, Dustin Johnson and Francesco Molinari sitting it out.

Hopefully between them all they’ll give you all a decidedly better week than the last one proved to be.