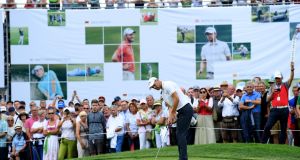 Germany’s Martin Kaymer of Germany putts on the ninth green during day one of the BMW International Open at Golfclub Munchen Eichenried in Munich, Germany. Photograph: Stuart Franklin/Getty Images

Martin Kaymer delighted the home fans with an opening 67 in the BMW International Open in a bid for his first victory in five years.

Kaymer, whose last European Tour title came in the 2014 US Open at Pinehurst, carded five birdies in a flawless round at Golfclub Munchen Eichenried to lie one shot off the lead held by Italy’s Andrea Pavan.

With an afternoon thunderstorm forcing play to be suspended for almost three hours, the first round will be completed on Friday.

“I didn’t play great but I played solid, put the ball in good positions to give myself chances,” Kaymer told Sky Sports. “I had three crucial putts today that kept the momentum on my side, so overall very solid.”

Addressing the support, he added: “It’s very nice, and as a German, it’s very rare we have that.

“We play many, many tournaments in America and Britain, so those guys are a bit more used to it, but for me, it’s only once a year so it’s also a little bit tricky because it’s so unexpected. It’s a bit of an adjustment, the first three or four holes but it’s very fun.”

England’s Oliver Wilson is alongside Kaymer on five under par, with defending champion and Race-to-Dubai leader Matt Wallace part of a large group two shots further back following a 69.

Wallace, who flew to Germany after finishing 12th in the US Open on Sunday, said: “I didn’t take advantage of the par fives and I was in good shape on most of them so it’s a little disappointing.

“I’m still maybe getting over a little bit of jet-lag so the intensity wasn’t quite there but it’s not bad.”

Wallace played alongside four-time Major winner Brooks Koepka in the third round at Pebble Beach and is trying to emulate the world number one’s composure on the course.

“That was probably my proudest moment ever on a golf course playing with him,” the 29-year-old Londoner added.

I was three over after nine, not playing well but controlled my emotions well, birdied 14 and eagled the last to shoot level par and keep myself in the tournament.

“I learned a lot that day – leave the door open for something good to happen, and it did.”

Gavin Moynihan carded a two-under 70 in Munich, the highlight coming on the 18th hole as he recorded an eagle-three after starting his round on the 10th.

Paul Dunne and Michael Hoey both have work to do after they both opened with two-over 74s.

On the US PGA Tour, Waterford golfer Séamus Powerwas two shots off the early clubhouse leaders after opening with a four-under 66 at the Travelers Championship in Connecticut.

Power was one under at the turn after starting on the 10th hole but picked up three birdies over the front nine to sit two shots behind the American duo Ryan Armour and Bronson Burgoon and South Korea's Kyoung-Hoon Lee. Pádraig Harrington carded a two-under 68 in his first round.

A tough first nine holes left Ireland’s Leona Maguire on the back foot after the first round of the KPMG Women’s US PGA Championships in Minnesota on Thursday.

The 24-year-old Cavan golfer started with a bogey on the 10th hole at the famous Hazeltine National and added four more to turn in five-over 41. Maguire stemmed the losses on the front nine, her only bogey coming at the fourth, as she signed for a six-over 78.

LEADERBOARD
(British and Irish unless stated, par 72, (a) denotes amateurs)
Round suspended due to darkness with 33 players left to finish their rounds