James Sugrue shows appetite for battle and more besides at Portmarnock 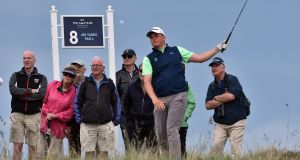 Mallow’s James Sugrue signals with his driver on the eighth hole during the British Amateur championship at Portmarnock Golf Club. Photograph: R&A via Getty Images

If ever there was a sight to behold, it was of James Sugrue in mid-session during the two rounds he played in this 124th edition of the British Amateur championship at Portmarnock Golf Club: an impromptu dining table was assembled for the strapping 6-feet 2-inch Corkman close to the short game practice area and, when the burger from The Gourmet Kitchen was delivered, he heartily tucked in.

Nobody could begrudge him the special treatment, not after what he’d produced on the famed north Dublin links. For his was a show of resilience, a never-say-die attitude that ensured his survival in the grand old championship

Whatever about his lunchtime nourishment, the 22-year-old from Mallow certainly had the appetite for battle where he produced a quite remarkable fightback to firstly overpower Sweden’s Christoffer Palsson, winning the final four holes to shake hands on the 18th green, and then – following his quick bite to eat – proving a hugely impressive 5 and 3 fourth-round winner over Spain’s Sergio Parriego Cornejo to progress onwards to the quarter-finals and a meeting with Dutchman Koen Kouwenaar.

And, demonstrating fortitude of his own, Ronan Mullarney also moved on to the last eight. For the 23-year-old Galwayman, however, his advancement only came after an almighty scare. Five-up after 12 holes of his fourth-round match with England’s Matty Lamb, Mullarney’s route home proved difficult to negotiate and it was with some relief that he finally managed to close the deal and secure victory on the 18th green, by a one-hole margin.

Sugrue’s day’s work was so different from match to match, chalk and cheese if truth be known. With a large gallery following his morning match with Palsson, who’d beaten him at the same last-32 stage a year ago in Royal Aberdeen, Sugrue was two down as he walked off the 15th tee where his tee-shot had missed the green.

“When I got down [to the ball], I didn’t have a good lie in the rough. I couldn’t get my lob wedge under it.” Instead, he contrived to use his 9-iron and the bump and run to finish five feet from the flag and he sank the par putt for a win.

“I just decided to play strokeplay [from there], just play my own ball and let him make the mistakes,” said Sugrue of his strategy coming in.

As it turned out, Sugrue’s birdie on the 16th reduced the margin to one and the Swede got into trouble right off the tee on 17 – running up a double bogey – which left them all square playing the last. Sugrue then won a fourth straight hole after Palsson was again in trouble.

By comparison, his last-16 match was a tamer affair as he took control early on and was shaking hands with the Spaniard on the 15th green without any requirement to revisit the closing stretch of his morning dramatics.

“To win would be nice. Myself and Mullarney in the final would be nice. I don’t think that’s ever happened and for it to happen in Ireland as well. These are all things that would be going through your head as well. Look, I’ll just try and take every game as it comes,” said Sugrue.

Mullarney holed a number of long putts – a 35-footer for birdie on the fifth, another from 40-feet on the 11th to move five up on Lamb – but ultimately it was a swinging two and a half footer for par on the 18th which proved most important of all as he got over the line and into the quarter-finals where he faces another Englishman, Ben Jones.

For those first 11 holes of his fourth-round match, Mullarney played great golf. “Look how quickly it can change . . . it was probably that I wasn’t functioning 100 per cent with my swing,” he said of the closing stretch but looking forward to the match-up.