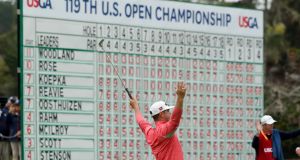 Sitting in a quiet corner of an airport lounge in San Francisco as the US Open hurtled towards its conclusion, Pete Cowen realised that he could not lose.

The Yorkshireman took over full-time coaching duties for Gary Woodland at the end of last year. Brooks Koepka, who ultimately failed to catch Woodland at Pebble Beach, has been a long-term Cowen pupil.

“I did the warm-up with Gary and he said he had never felt more at ease with his swing,” Cowen said. “That’s my job done then. Off to the airport. It’s like a racehorse trainer. You do your work on the gallops, then you can’t do anything when they’re racing.”

Woodland understandably credits Cowen as a key influence on the ending of his major drought at the age of 35.

“Pete’s been amazing for me,” the new US Open champion said. “He’s not really a teacher; he’s a coach. He tells you: ‘This is the gameplan. This is what we’re going to do’. And then it’s up to me to do it.

“He sent me a text on Sunday morning that had nothing to do with my golf swing or technique. He said: ‘Every man dies but not every man lives, and you live for this moment’. He knows what to say and when to say it. We’ve been working on the full swing only since December and I’m hitting it as good as I ever have.”

Cowen’s approach to Woodland is fascinating. In the early stages of their alliance – Woodland had been under the tutelage of Butch Harmon – Cowen became irked by regular cries for help from the Kansas City native. Woodland’s background in college basketball, it seemed, was a professional hindrance.

“I did tell Gary that I didn’t want him ringing me and texting all the time for answers,” Cowen said. “I told him that he has to take responsibility for his swing and really get to understand it because, if he needed to fix it during a round, then he has to do it on his own.

“All great players can do that, realise what is wrong and be able to make the fix. That has been the biggest thing with me and Gary, making him understand his swing and, as soon as you do understand that, it also relieves the pressure.

“Gary was into team sports when he was young and was always into that environment of being told what to do. He was still stuck in that mindset, couldn’t work it out for himself. Golf is an individual sport. He was lost when things started to go wrong. There was no coach on the sidelines, bellowing at him what to do. He is 35 now and the penny has dropped.”

Woodland’s three-shot triumph in California meant Koepka could not secure his third US Open title in a row. Still, he has become the third player since the Masters was played –- along with Ben Hogan and Tiger Woods – to finish second or better in four successive majors.

“This will motivate Brooks even more, getting so close to history like that,” Cowen said.

Cowen can lay claim to one of the most continuously successful coaching careers in Britain, which for some time has covered both sides of the Atlantic. Earlier he focused mainly on the European Tour as Lee Westwood, Darren Clarke, Graeme McDowell and Henrik Stenson started to make their name.

“They started playing more and more in America and I got exposed to the American players and they got exposed to me,” Cowen said. “They like hearing it in simple terms.

“I was going to retire a while ago but I can’t retire now with this chapter going on, can I? I was looking down the leaderboard thinking, ‘I coach him, him, him and I’ve worked with him, him, him in the past’. In the top 15 I think I’ve worked at one stage or the other with about 12 of them and nine of the top 11.

“I don’t really care about the recognition thing. It’s about the players, isn’t it? It’s brilliant helping someone like Gary reach his ambitions.

“The US Open is like the Open to us. Pebble is a good place for me; my first Major was with Graeme in 2010 there and now my most recent Major is at Pebble. It’s been a hell of a decade.”