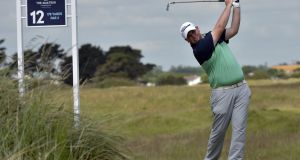 Caolan Rafferty shot a round of 68 at Portmarnock Golf Club. Photograph: Pat Cashman

You couldn’t really picture Caolan Rafferty as any version of Mr Angry. He goes about playing the game with a beautifully rhythmic swing and possesses wonderfully soft hands in his short game, as he demonstrated in the second round of strokeplay qualifying in the 124th British Amateur Championship at Portmarnock Golf Club, where he shot a superb four-under-par 68 for a 36-holes total of 142, comfortably easing his way into the matchplay phase in tied-sixth.

Yet, as the 26-year-old Dundalk player revealed after signing his card, his mood just 24 hours earlier - after a tough opening round at The Island which necessitated taking an unplayable lie and a series of “bad lip outs” - had been considerably darker. “It was the first time I got angry on a golf course in a long time,” he confessed.

Rafferty found a cure for such matters though. As a house guest for the night in Conor Purcell’s nearby home, the two held chipping contests in the back garden, while some ‘phone calls back home also worked a treat. “It’s amazing how they can calm you down,” said Rafferty, who is a business management student at NUI Maynooth but also the current holder of both the West and South of Ireland championships.

Indeed, one of Rafferty’s friends texted him before the second round urging him to simply go out and “shoot your handicap” and everything would sort itself out. Rafferty, a plus-five handicap, just about managed that feat and his 68 sent him leapfrogging up the leader-board and guaranteed his presence in the matchplay phase.

In a round of five birdies and just one bogey, it was actually an early par save which provided the momentum for Rafferty to kick on. On the 396 Yards Par 4 third hole, Rafferty opted to hit 2-iron off the tee but hit probably the worse shot ofhis round. The ball failed to reach the fairway and was, as he admitted himself, “horrendous.”

But he managed to hit the recovery shot to exactly 101 yards from the flag and hit his approach to four feet and sank the putt for par. Rafferty followed up with a birdie on the fourth. “It felt like I robbed three shots off the golf course,” he later quipped.

And so it was that Rafferty played beautifully for most of the remainder of the journey, with a supreme display of driving in the wind to ensure that he accomplished the job of qualifying for the matchplay phase. “This is one of the big ones. I do enjoy it, love competing at this level now. You are after getting your foot in the door, you might as well try and stay there,” said Rafferty of his golfing philosophy.

Unfortunately for his host, Purcell failed to survive beyond the strokeplay qualifying. Purcell – ranked 17th in the world – couldn’t recover from a poor first round at The Island on Monday and fell to 75 on his home links which contained a double-bogey and two bogeys in his five holes as the wind was very much taken from his sails.

Rafferty was one of four Irish players to make it into the matchplay phase - which takes place entirely at Portmarnock, with the final on Saturday - where he was joined by Waterford’s Eanna Griffin, Mallow’s James Sugrue and Galway’s Ronan Mullarney.