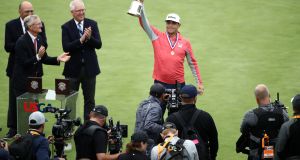 Gary Woodland of the United States celebrates with the trophy after winning the 2019 US Open at Pebble Beach Golf Links. Photo: Ezra Shaw/Getty Images

Gary Woodland believes his US Open victory is just the “tip of the iceberg” thanks to the influence of renowned coach Pete Cowen.

Woodland carded a final round of 69 at Pebble Beach to finish three shots ahead of defending champion Brooks Koepka, who had threatened to become just the second player to win three straight US Opens and claim an amazing fifth major victory in his last nine starts.

England’s Justin Rose was tied for the lead after a birdie on the opening hole but faded on the back nine to share third with Jon Rahm, Xander Schauffele and Chez Reavie, while the expected challenge from Rory McIlroy never materialised after a double bogey on the second.

Woodland had failed to convert any of his seven 54-hole leads on the PGA Tour into a win, but withstood Koepka’s early charge thanks to two memorable shots in the closing stages to seal victory and secure the first prize of 2.25million US dollars.

After dropping two shots in the previous five holes, Woodland hit a brilliant approach from 263 yards to the par-five 14th to set up a vital birdie and then showed sublime touch with a pitch off the corner of the 17th green to save par.

The 35-year-old from Kansas initially began working with Cowen on his short game but now trusts the Yorkshireman with all aspects of his swing following the retirement of Butch Harmon.

“Pete’s been amazing for me,” Woodland said. “I worked with Butch for a long time and Butch is the one that recommended me to go to Pete a year and a half ago for the short game. When Butch decided to retire, it was an easy transition for me to do everything with Pete.

“Pete to me is like a coach. He’s not really a teacher, he’s a coach. He tells you this is the game plan, this is what we’re going to do, and then it’s up to me to go out and do it.

“But like Butch, he knows what to say and when to say it. He sent me an unbelievable text this morning (Sunday) that had nothing to do with my golf swing or technique.

“He said ‘Every man dies, but not every man lives, and you live for this moment.‘ I thought about that a lot and he’s been great for me. But I think we’re only on the tip of the iceberg.

“We were working on short-game shots and he’s like, ‘No, I don’t think you can execute that under pressure. Let’s go back and do it this way, let’s simplify things.‘

“It was huge having him here. I didn’t hit it well on Thursday. I went straight to the range and we worked for a long time to figure it out. It’s a work in progress. We’ve only been (working on) the full swing since December and I’m hitting it as good as I ever have.”

Woodland was a promising basketball player who received a scholarship to attend Washburn University, but soon realised he had more of a future in golf.

“Our first game we played Kansas and I was guarding Kirk Hinrich and was like ‘OK, I need to find something else, because this ain’t gonna work,” Woodland joked of his encounter with Hinrich, a future first-round pick in the NBA Draft.

“I was a two-time State champion, All-State, blah, blah, blah, but that was a different level. And so when I transitioned to golf the next year, that was the first time in my life I’d ever focused solely on golf.

“I got out here (on the PGA Tour) a year after school in 2009 and I don’t think my game is where it needs to be, but it’s getting there.

“We decided to be aggressive.”

“I’m becoming a more complete player, I have more shots. I can rely more on my putting, rely on my short game. Things I couldn’t do even last year.

“We put a lot of work in this year in becoming a more complete player. I can play different golf courses. People probably growing up said US Open wouldn’t suit me, because I’m a long hitter, I’m a bomber.

“Coming to Pebble Beach, on top of that, it’s a shorter golf course. And I went out and proved, I think to everybody else, what I always believed, that I’m pretty good.”