Ronan Mullarney recovers in style to progress at Portmarnock 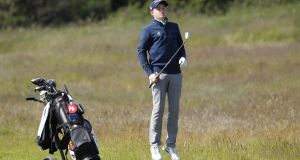 If it were strokeplay, chances are that even Ronan Mullarney’s powers of recovery would have proven insufficient. In matchplay, though, things are different. And after the 23-year-old Galwayman started his second round match in this 124th British Amateur Championship with not one but two tee shots going askew into the estuary to lose the opening hole, the damage was repairable. As he proved.

Indeed, Mullarney recovered brilliantly from that first hole speed bump to ensure his day’s work - which had started with a 5.55am alarm call - was done by the 17th green, where he shook hands with England’s Jake Bolton after a 2 and 1 win earned him a place in the championship’s last-32. Earlier, Mullarney had accounted for American Mason Andersen also, coincidentally, finishing the match on the penultimate hole.

Mullarney was one of two Irish players to advance into the next phase as the field was further whittled down from 76 players to 32, with Mallow’s James Sugrue beating the accomplished English player Harry Hall by 2 and 1 to also progress.

However, there was disappointment for Caolan Rafferty and Eanna Griffin who each relinquished strong positions on the homeward run of holes to bow out, in Rafferty’s case on the closing hole, where a missed approach shot finished in heavy greenside rough and led to a costly bogey.

Despite the early alarm call, and requiring two matches to ensure his place in the final 32 men left standing, Mullarney’s first port of call after overcoming Bolton was to head for the practice ground to work on some glitches in his swing. The prize on offer here is too great to leave any stone unturned, coming as it does with exemptions into next month’s British Open and next season’s US Masters and US Open for the winner.

In advocating to “take it one match at a time,” Mullarney - who is completing his Masters in Strategy and Innovation at NUI Maynooth - has been really taken with the examination and the presentation of the links. “It’s brilliant, a mental test more than anything else. I have never checked the yardage book so many times before a shot. It is not necessarily where the pin is, it’s where to leave yourself in relation to the pin.”

Mullarney’s third round match will pit him against Swedish player Ludvig Aberg, while Sugrue will have a familiar opponent in another Swede, Christoffer Palsson. The familiarity? Well, it was Palsson who ended Sugrue’s interest (at this stage) in last year’s championship at Royal Aberdeen.

To get that chance at redemption, Sugrue had to overcome Hall, a two-time Palmer Cup player and a graduate of the University of Nevada. The powerfully built Sugrue had a tough old battle. “I knew Harry is obviously a very good player and he’s coming off a great run of tournaments. Knew it would be a tough match, he’s a bump and run master. But I played lovely, couldn’t really have asked for more,” said Sugrue, a former South of Ireland champion and current Irish international.

The defining hole in the match came on the Par 5 16th, where the pair hit near identical drives. Two peas in a pod, almost. “I had to get him to mark his ball we were a couple of inches apart. I didn’t really like it, he had a coin and it was literally only a few inches away from my ball,” recalled Sugrue, who hit his second into rough from where he then hit his approach to 25 feet. Hall hit his third to eight feet. But Sugrue rolled in the long birdie putt and Hall missed his. And a half with pars on 17 was sufficient for Sugrue to move on.