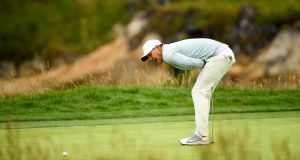 Brook Koepka has said he is ‘mentally exhausted’ after narrowly missing out on another US Open win. Photgraph: Ross Kinnaird/Getty

Brooks Koepka will attempt to replicate his approach to majors in the Travelers Championship but admits he is “mentally exhausted” after missing out on the US Open.

Koepka finished runner-up to fellow American Gary Woodland at Pebble Beach on Sunday as he sought to join Scotland’s Willie Anderson (1903-05) as the only players to win three straight US Open titles.

The 29-year-old, who has won four majors in his last nine starts compared to just two regular PGA Tour victories since joining the circuit full time in 2015, made headlines after saying he “couldn’t care less” about his result in the Canadian Open ahead of the US Open.

“Let me set the record straight on that one,” Koepka told a pre-tournament press conference. “It’s not about I don’t care about the event. Some people took it a bit differently.

“I wouldn’t tee it up if I didn’t want to win but not everything is results-based with me.

“If I get the process down, the result’s going to come and that’s how I feel. I even told my caddie today we’re going to try to take the mental approach that we do at the majors this week.

“I’m going to try something maybe a little bit different and see how it works out.”

Koepka took a month off after winning the US Open in 2017 but played the Travelers Championship last year in the week immediately after successfully defending his title at Shinnecock Hills.

“It’s a lot different when you win, trying to play the week after it’s very hectic and chaotic,” the world number one added.

“This week is a little bit easier but still today you feel mentally exhausted from last week being in contention but after another day of rest I’ll be fine for tomorrow.”