Purcell has work to do to match matchplay in British Amateur 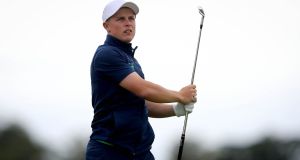 Conor Purcell: faces a battle to make the top 64 and the matchplay stages following a 76 at The Island. Photograph: Ryan Byrne/Inpho

The 10th hole at The Island Golf Club, the superbly manicured links in Donabate which in the old days used to be reached by a boat across the estuary from Malahide, is known as “Quarry”. It is a par five of some 525 yards and, for a number of players competing in this 124th British Amateur Championship, the hole – playing into the teeth of the wind – provided some discomfort.

Unfortunately, one of its victims was Conor Purcell.

The 20-year-old Dubliner – ranked 17th in the world and with genuine designs on the oldest of amateur titles having reached the semi-final last year – had one of those days in the first round of strokeplay qualifying in north county Dublin where it seemed as if the golfing gods were out to inflict as much misery as possible.

Purcell, a winner of the Australian Amateur Open earlier this year, and who is set to make the Britain and Ireland team for the Walker Cup later this season, signed for a five-over-par 76 that has left him with an uphill battle to reach the matchplay phase.

He will hope that moving across the estuary for some home comfort on his home club of Portmarnock for the second of his qualifying rounds will enable him to perform some sort of salvage operation.

“If I can shoot a good score [at Portmarnock]. It doesn’t matter if you are 64th or first [in qualifying], if you are in there, you are in with a shout,” said Purcell, adopting a mature approach to the task that lies ahead.

Although his putter was on the cold side, it was a double bogey seven on the 10th – where his tee shot curled into a fairway bunker down the left-hand side – which really hurt. Purcell had company in the sand trap, as his Finnish playing partner Santeri Lehesmaa also put his drive there too. And, as it happened, both players suffered similar fates as their initial recovery shots hit the lip of the bunker and came back to them.

“I think 10 summed up my day. I was just trying to splash it out and I thinned it straight into the lip, trying to move it 20 yards. It cost me a huge number which put a sour taste at the start of the back nine, but I held in there,” said Purcell who, to his credit, stuck to his task on that homeward run until a three-putt bogey on the 18th came like a sucker punch.

Purcell’s task, as he acknowledged, would be to bounce back with a score on home turf at Portmarnock which would enable him to move upwards to claim a place in the 64 and ties who progress to the matchplay phase of the championship.

Overall, the Irish players in the field – for only the second staging of the British Amateur Championship in the Republic – experienced a disappointing opening day’s play.

One of the 38 flags which blew in the wind on the approach road was that of Morocco. And, as it happened, one of the north African country’s representatives – despite an unfamiliarity with links golf – would impress hugely as Ayoub Ssouadi claimed a share of the first day lead.

Ssouadi , winner of the Pan Arab championship least year, and England’s Harry Hall shot four-under-par 67s at The Island while Germany’s Anton Albers shot a four-under-par at Portmarnock to set the pace in the championship which has 288 competitors.