Out of Bounds: The Ryder Cup is big, big money 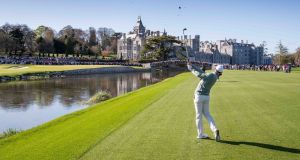 Adare Manor Golf Resort is at the forefront of contenders to play host to the Ryder Cup in 2026. Photograph: Inpho

Those folk of a golfing and business bent in the Limerick area, and indeed those influential folk who occupy nice leather seats in the government, might be interested in a recent study paper from the Sport Industry Research Centre at Sheffield Hallam University.

With Adare Manor Golf Resort at the forefront of contenders to play host to the Ryder Cup in 2026, researchers at the SIR’s study concluded that last year’s shindig in Paris boosted economic activity in France by €235.7 million. Indeed, the findings estimate that money spend as double that of the previous match on European soil, at Gleneagles in Scotland in 2014.

Adare Manor - which next year showcases the magnificently redesign of the course by Tom Fazio when the JP McManus Invitational Pro-Am takes place, a tournament already with commitments from Tiger Woods and Phil Mickelson - is the firm favourite to land the match, although the selection process is still in train.

The bottom line is that the Ryder Cup is big, big money: the figures from the SIR took into account spending by 270,000 spectators who attended the 2018 match at Le Golf National near Versailles, with an estimated 220,000 accounting for commercial beds in the Paris area. Some eight percent of those visitors extended their stay beyond the actual golf.

It remains to be seen what the legacy aspect of the Ryder Cup will mean to France, beyond the development of 100 municipal short-game courses aimed at bringing more players to the sport, but there can be no denying the economic benefit that the match generated for the economy . . . and which, by extension, would come the way of the Limerick area should that bid to get the 2026 edition to Adare Manor prove successful.

Apparently, there are a number of venues vying for the 2026 match. A number of courses in England - among them Wentworth and The Belfry - are believed to be also interested, which could provide the greatest challenge to Adare Manor’s prospects although the European Tour (for which the Ryder Cup is its greatest asset) have adopted a different approach in selecting the venue for 2026.

For the 2022 match, a formal bidding process was instigated. Although seven countries initially indicated their keenness to play host to the Ryder Cup, ultimately only four countries - Italy, Spain, Germany and Austria - actually submitted formal applications. The match was awarded to Marco Simone Country Club in Rome, Italy.

So it is that the selection process for 2026 - which is ongoing - has been less public, more silent if you will. Adare Manor are very much in the frame. And as those figures from Paris indicate, it would be worth quite a lot to the area if it comes their way.