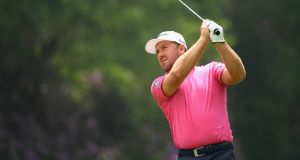 Graeme McDowell had an eagle in his opening round of 66 at the Italian Open at Gardagolf CC, Brescia. Photo: Ross Kinnaird/Getty Images

Graeme McDowell continued his improved form to lead the Irish charge after the opening day of the Italian Open in Brescia where his round of 66 for five under par leaves him three shots off the lead held by Robert Rock and Laurie Canter.

The 2010 US Open champion finished tied-12th at last week’s BMW PGA Championship and took that form to the shores of Lake Garda this week where he looks to pick up some more valuable Race to Dubai points in what is another Rolex Series event with a purse of €6 million on offer.

After two birdies and two bogeys made up an unremarkable front nine, it was a rain delay which seemed to make the difference for McDowell. With a thunderstorm rolling in off the Dolomite Mountains, the players were taken off the course for over an hour. When they got back out, McDowell really got going, highlighted by an eagle two at the 14th.

After birdies at the 10th, 12th and 13th were dented only slightly by a bogey at the 11th, he holed out with his second shot at the 443-yard Par 4 14th to get to four under par for the day. From there he would go on to birdie the 16th to pick up another shot and sign for a round of 66.

For Paul Dunne it was very much a mixed bag on the opening day as he carded just six pars en route to a round of 69 which leaves him at two under par and six shots off the lead.

After missing the cut at Wentworth last week, Dunne has the chance to make amends straight away at what is a second consecutive Rolex Series event carrying a prize fund of €6,000,000. This week also represents the 25-year-old’s last shot at making it into the top-60 in the world rankings (he is currently 71st) and thereby securing a place at the US Open. Should he fail to do so he will head to Woburn on Monday for international qualifying.

If Dunne is to book his spot at Shinnecock Hills he will need to find some more consistency over the next few days after racking up five bogeys to add to seven birdies on Thursday at Gardagolf.

Starting on the 10th the Greystones man was going along nicely through his first six holes with four birdies and a single bogey getting him to three under par. However, despite the calm morning conditions, Dunne wasn’t getting much enjoyment out of the stretch of holes around the turn.

Three consecutive bogeys on the 18th, the first and the second undid all his good work earlier on in the round and left him scrambling to stay in touch with the leaders who were making light work of a soft course and the placing which was implemented for the opening round.

Despite that run of bogeys the British Masters champion regrouped and birdied the third, fourth and seventh before dropping another shot at his final hole to sign for a very up-and-down round of 69.

Pádraig Harrington was left with a sour taste in his mouth after he double bogeyed the 18th hole to sign for a level par round of 71.

Former Masters champion Danny Willett carded his lowest round of the season as he looks to halt his alarming slide down the world rankings in the Italian Open.

Willett reached a career-high of ninth in the world after claiming his first major title at Augusta National in 2016, but has since plummeted to 462nd after struggling with injuries and a loss of form.

But on a day of low scoring at Gardagolf in Brescia, Willett compiled a bogey-free, six-under-par 65 to lie just two shots off the lead.