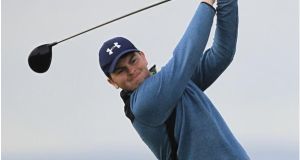 Dundalk’s Caolan Rafferty was the best of the Irish in the French Amateur championship at Chantilly.

Change of date for All-Ireland finals

A clash with Féile 2018 The Trip to Tipp concerts in Thurles have forced the GUI to put back the AIG Cups and Shields finals by two weeks to October 4th- 7th .

The All-Ireland finals were scheduled to be played over three days from September 21st -23rd but with an extra date announced for the Féile schedule at Semple Stadium, pressure on accommodation and other factors have forced the GUI to take action and play the event over four days in early October instead.

Mark Wehrly, championships manager with the GUI said: “Since the announcement of the Feile Classical towards the end of April, we have had discussions with Thurles Golf Club, local stakeholders, our sponsor AIG and colleagues in the media on the impact of the festival on our schedule for the Cups and Shields Finals.

“Of primary concern is the complete lack of available accommodation at Thurles and in the wider hinterland were we to proceed with the Cups and Shields on our preferred dates, although ancillary concerns relating to traffic management, access to the course and facilities and pressure on other local services and amenities was also borne in mind.

“Having discussed the issue with everyone concerned, the only option available to us was to reschedule the event at the earliest viable date and avoid clashing with other significant golf events around that time at home and abroad.”

As a result of the change it is also necessary to alter the dates for the finals of the Irish Mixed Foursomes at Milltown Golf Club. These will now proceed on Tuesday 2nd and Wednesday 3rd October.

Wehrly added “We appreciate and value the support and co-operation we have received from Thurles and Milltown Golf Clubs in relation to this.”

Rafferty best of the Irish at Chantilly

Dundalk’s Caolan Rafferty tied for 16th as France’s Hubert Tisserand claimed a one-shot win in the French Amateur Open at Chantilly. The Maynooth University golfer followed rounds of 74, 69 and 72 with a final round 71 to finish on two-over-par 286.

Tisserand shot a one-over-par 72 in the final round, finishing with a birdie to edge out compatriots François Lagralet (68) and Jeremy Gandon (71) by a stroke on five-under-par 279.

Foster carded rounds of 216 T Foster (Eng) 74 72 and a two-under-par 70 for a level par total of 216. The champion made four birdies and two bogeys as compatriot Graham dropped three shots in his first three holes en route to a 77 for 218

It was a day to forget for Naas’ Maurice Kelly, who moved into the lead with an opening birdie to Graham’s double bogey but failed to make another, closing with an 83 at the tough Castleblayney venue to finish nine shots behind the winner on nine-over 225 (72, 70, 83).

Ballybunion’s Peter Sheehan fired a final round of level par 72 to win the Connacht Mid-Amateur Championship by two strokes at Oughterard Golf Club. Tied for the 36-holes lead with Athlone’s Thomas O’Connor on level par after rounds of 71 and 73, the former South of Ireland champion moved four shots clear when he reached the turn in one-under and then made an eagle two at the par-four 11th.

He dropped three shots coming home for a level par 72 to O’Connor’s 74 to clinch victory on level par 216, adding the Connacht Mid-Amateur title to his win in the Ballybunion Senior Scratch Cup the previous weekend.

The Golfing Union of Ireland have named a six-man squad to compete at The Amateur Championship, which will be held at Royal Aberdeen and Murcar Links for the first time.

Mallow’s James Sugrue, who has climbed to fourth in the Bridgestone Order of Merit thanks to his top 10 finish at the recent Flogas Irish Amateur Open, has been included in the squad alongside Flogas champion Robin Dawson (Tramore), Alex Gleeson (Castle), Rowan Lester (Hermitage), Caolan Rafferty (Dundalk) and Jonathan Yates (Naas).

Dawson is now Ireland’s highest ranked player in the world having moved up to 40th courtesy of his victory at Royal County Down. Dundalk’s Caolan Rafferty returns to The Amateur with happy memories following his silver medal success in 2017 when he was the leading qualifier at Royal St George’s and Princes after shooting a 10-under par round of 62 in stroke play qualifying.

The top 64 and ties following two rounds of stroke play qualifying progress to the match play stages, which will be held at Royal Aberdeen. Recent Irish winners of The Amateur include Alan Dunbar (Rathmore) in 2012, Brian McElhinney (North West) in 2005 and Michael Hoey (Shandon Park) in 2001.

McKibbin to play in Junior Open

Holywood teenager Tom McKibbin has been selected to compete at this year’s Junior Open. Founded in 1994, the Junior Open is staged every two years. The event is closely linked to The Open and played on a nearby course.

This year’s Junior Open takes place on the Eden Course at St Andrews from 16-18 July. All nations affiliated to The R&A are invited to enter their leading boy and girl golfers under the age of 16 for this biennial event which is played over three rounds of stroke play.

There is both a scratch and handicap element to the event. All competitors will play 36 holes with the leading 80 and ties (gross) qualifying to play the third round. The Island’s Kevin LeBlanc won the Junior Open at West Lancashire in 2014 and Limerick’s Cian McNamara won at Royal Musselburgh in 2002.

It was a one-two-three for the home club as Tobin’s excellent final round saw him win from Dean McMahon, who edged out Jack Ryan for second place after a fine 71.

Ryan came out with all guns blazing, carding a four-under 68 in the opening round to lead by two strokes from Fota Island’s Greg O’Mahony with Tralee’s Owen O’Donnell three off the pace after a 71. But he took 10 strokes more in the afternoon round.

West of Ireland champion Robert Brazill struggled to an opening 78 as South of Ireland winner James Sugrue posted a 77.

But while Brazill made a charge in the afternoon, carding a 69 to finish fourth on three-over 147, Tobin showed the field a clean pair of heels.

While he dropped shots at the fourth and the par-three 14th, birdies at the second, seventh, 11th, 12th and 16th gave him a clear-cut victory.