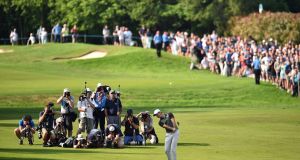 Rory McIlroy chips on to the 18th during the third round of the PGA Championship at Wentworth. Photograph: Glyn Kirk/AFP/Getty Images

Rory McIlroy admitted he rode his luck after hitting two spectators and a marshal in an eventful 71 which kept him on course for a second BMW PGA Championship title.

McIlroy took a three-shot lead into the third round at Wentworth and was an odds-on favourite to win the €6 million event at European Tour headquarters, but struggled to get to grips with a swirling wind which made scoring difficult.

The four-time Major winner was already one over par for the day when he attempted a risky recovery shot on the sixth following a wayward tee shot, but succeeded only in crashing his ball into the crowd and hitting a young woman directly on her right hand.

As she received treatment, McIlroy went on to run up a double bogey six and fall out of the lead, but he bounced back immediately with a birdie on the seventh and picked up further shots on the 12th, 17th and 18th.

McIlroy’s second shot on the 17th clipped a marshal who was also hit by playing partner Sam Horsfield, but it was the Northern Irishman’s errant drive on the 18th which did the real damage, hitting a woman on the head and drawing blood.

“When you see blood, the one on 18 shook me a little bit but she reassured me she was okay. It’s never nice. I remember playing the final round here in 2014 and Pablo Larrazabal hit a lady on the left-hand side of 11 and basically didn’t hit a shot for the rest of the round.

“It’s tough. You can say sorry and maybe give them a glove but that’s not going to do anything for them. I’m just thankful my ball didn’t go where it was heading and I just hope they’re okay.

“I got lucky today, I got very fortunate. I got good bounces off spectators and I rode my luck and I’m just going to have to play better to have a chance.”

On 13 under par, McIlroy shares the lead with former Ryder Cup team-mate Francesco Molinari, whose 66 was the lowest score of the day by two shots.

Molinari was runner-up to Alex Noren 12 months ago and has recorded four other top-10 finishes at Wentworth in the last six years, but was not about to take anything for granted.

“I am going to be ready. I am going to do my best, obviously whatever is in my control,” Molinari said. “There are a lot of really, really good players up there so it won’t be easy, but I need to do what I did today, just keep in the moment and hit shot by shot and see if that will be enough.”

The leading pair are four shots ahead of Noren, Horsfield – who shot 72 after being four over par for the first 10 holes – Ross Fisher and Branden Grace, with Lee Westwood among a four-strong group on eight under.

Westwood is trying to win the title for the first time at the 25th attempt, although he did win the World Match Play title at the same venue in 2000.

Asked what it would mean to do so at the age of 45, Westwood joked: “It would mean there’s a picture of me at Wentworth with a few less chins. I came very close in 2011 and Luke Donald pipped me in a playoff but this course seems to suit my game.”

Westwood’s last competitive round before this week was a 76 in the Houston Open on March 31st and not being eligible for the Masters the following week prompted him to take a lengthy break.

“I didn’t think my game would be so sharp but I’m an old dog with old tricks and they are never far away,” added Westwood, who was named a Ryder Cup vice-captain by European skipper Thomas Bjorn at the start of the week.

Shane Lowry will go into the final round on six under after he carded a two-under 70, while Graeme McDowell is a shot further back after a one-over 73.