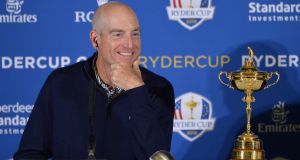 US Ryder Cup captain Jim Furyk is planning a trip to Le Golf National in Paris in July ahead of the match itself in September. Photo: Aurelien Meunier/Getty Images

Jim Furyk hopes to profit where Tom Watson could not by tempting potential USA players with a scouting trip to the Ryder Cup venue immediately before the Open.

Watson’s plan backfired spectacularly four years ago when only two players, including Furyk, headed for Gleneagles before the Open at Hoylake. Watson’s team later suffered a comprehensive defeat in Perthshire.

Furyk, the 2018 US captain, is looking to guide his nation to a first victory on European soil since 1993. He believes greater American knowledge of the course will benefit the Ryder Cup holders. The PGA of America and Furyk are putting the final touches to plans for a US delegation to inspect Le Golf National on the outskirts of Paris on Saturday and Sunday before the Open at Carnoustie. The Americans would then travel together to Scotland for the third major of the season.

Intrigue will surround which professionals accept Furyk’s overtures, given the French trip will not be compulsory, but increased team spirit has been widely cited as key to recent US success. Tiger Woods traditionally appears at the Open course for practice from the pre-tournament Saturday but has already been named as one of the USA’s vice-captains. Woods retains hopes of making a playing appearance in France. Eyebrows would be raised if Woods puts his Open bid before his role within Furyk’s backroom staff.

For the third year in succession, and immediately before a defence of the Claret Jug, Jordan Spieth is expected to skip the PGA Tour’s John Deere Classic. That raised hopes in Scotland the Texan could be tempted towards the Scottish Open at Gullane but Spieth would presumably join the Ryder Cup excursion unless handed special dispensation.

Phil Mickelson routinely plays in the Scottish Open but there has been no confirmation relating to that – plus a string of other American players – thus far, just as the John Deere cast list has been slow to emerge. Rickie Fowler won the Scottish Open the last time it was at Gullane in 2015. Justin Thomas, the world No 1, has committed to playing at Le Golf National in the French Open next month.

Speaking earlier this year, Furyk said of the Ryder Cup course: “My goal is to respect everyone’s schedule, what they have going on with their family, with their sponsors and with the events that they like to play.” – Guardian service

1 Keith Duggan: Through the glories and the disgraces, we were all Maradona addicts
2 Diego Maradona dies of heart attack, aged 60
3 Rugby Stats: Blame game at lineout time is on the whole team
4 All bets are on as America opens the gambling sluice gates and the dollars flow
5 Lahinch’s €1.3m loss highlights toll of coronavirus on Ireland’s top courses
Real news has value SUBSCRIBE

Joanne O’Riordan: Peamount show their pedigree as they prove themselves again 06:37
Fear won’t be a factor as Waterford get their licence to thrill 06:00
Limerick’s O’Donoghue wishes it was comrades all on the road to Croke Park 06:36
Sonia O’Sullivan: A lost season for Irish athletes in the springtime of youth 06:00
Amber Barrett hoping Ireland can do a Tipp against Germany 06:00
Here is your handy guide to sport on television this week