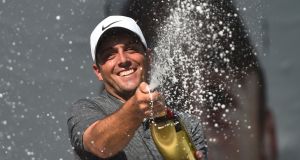 No wonder Francesco Molinari is suddenly eyeing a Ryder Cup berth. No wonder Thomas Bjorn, Europe’s captain, would be delighted to have him. The Italian’s previous two appearances in the biennial event have resulted in victories for Europe. Wentworth on Sunday served as a reminder of Molinari being much more than a lucky mascot.

Molinari’s bid to form part of the 2018 Ryder Cup contingent received a huge boost with victory at the PGA Championship. His closing 68, for an 17-under total, saw off Rory McIlroy’s challenge by two. Molinari’s unflappable showing could only have impressed Bjorn, as will the European Tour’s latest champion having a proven knack at Le Golf National. He has been a three-time runner-up at the French Open, the venue for September’s Ryder Cup match.

“It’s on a course I love and where I have almost as good a record as I have on here, so I’d love to be there,” Molinari said. “Unfortunately my last really good week up until now was in August last year, just before the start of the Ryder Cup qualification period. I didn’t even look at the standings after that, to be honest.

“I don’t know where I was in the table but it’s not nice seeing that you’re a long way back. So I tried to focus on other things. Now I’ll probably have a look and enjoy it, but there’s a long way to go.”

Until the very last hole, where McIlroy left an eagle putt agonisingly short, there looked no prospect at all of Molinari wilting in front of his illustrious playing partner. For all McIlroy was well short of his best and went round in a two-under 70, Molinari should be afforded immense credit.

“I’m old enough now that I’ve played in probably tougher circumstances even than today, playing against Tiger [Woods] in the Ryder Cup and stuff like that,” Molinari said.

“Rory is a great guy. I didn’t feel intimidated at all. The last couple of holes, he’s basically thinking eagle, eagle. I’m thinking par, par, and that makes the whole difference.”

There must be something about Italians and Wentworth: 22 years ago and as a schoolboy, Molinari watched Costantino Rocca win here, and Matteo Manassero prevailed in 2013.

Molinari started day four in a tie for the lead with McIlroy. The subsequent success was his fifth on the European Tour, a first since 2016 and it could catapult him inside the world’s top 20.

If there is a positive for McIlroy, it comes with a runners-up finish and his B-game in play. In his previous outing, at the Players Championship, he missed the cut. Still, expectation from the man himself naturally triggered dejection. McIlroy now heads to Ohio for this week’s Memorial Tournament before making a latest bid to add to his major haul, this time at the US Open.

“I’m disappointed I didn’t play better over the weekend,” he said. “I was in a great position after two days, struggled yesterday and sort of struggled today as well. I just couldn’t get it going. I let Francesco get a few shots ahead on me and I just couldn’t claw that back. It’s disappointing, I put myself in a position and I didn’t get the job done.

“That’s not taking anything away from Francesco. He played a great weekend and bogey-free around here is some playing. He deserved the win.”

Denmark’s Lucas Bjerregaard produced a brilliant 65 to share third place with Alex Norén at 14-under. – Guardian