Out of Bounds: Olivia Mehaffey is further proof of upward trend 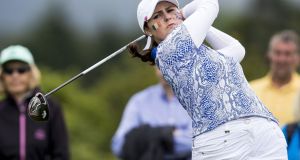 Ireland’s Olivia Mehaffey will play in the US Women’s Open. Photograph: Colm O’Neill/Inpho

Where once it was as rare as hen’s teeth for an Irish woman golfer to play in the US Women’s Open, the oldest and arguably the most cherished of all the Majors, things have changed dramatically in recent times which is further proof that the high performance programme of the ILGU along with a willingness to embrace the US collegiate system is working.

That there is more than one player blazing the trail is the most encouraging aspect of all. Stephanie Meadow was the trailblazer - securing a third place finish on her professional debut at the championship in Pinehurst in 2014 - and the Northern Irishwoman also competed in 2015, while Leona Maguire teed up in the championship in both 2016 and 2017.

Now, Olivia Mehaffey - one of five alternates called into the field for this week’s US Open at Shoal Creek in Alabama, where the bad weather has affected practice rounds - has ensured that the sequence of an Irish presence in the field will be an unbroken one extending to five years.

Mehaffey’s is a wise old head on young shoulders

It is becoming the norm rather the exception for an Irish player to tee up at the biggest , which augurs well going forward . . . and the ILGU’s assimilation with the GUI into one governing body for golf in Ireland (the proposal is currently going forward to clubs for ratification) will hopefully continue that conveyor belt of talent.

Mehaffey’s is a wise old head on young shoulders and her appearance in the US Women’s Open this week - following in the footsteps of Meadow and Maguire - will be another part of the learning curve. History, though, is very much against her in terms of winning as an amateur: the last to do so was French player Catherine Lacoste back in 1967.

In a conversation I once had with Mehaffey ahead of her taking the collegiate route in the United States, she explained: “I was contacted by a lot of colleges, had a lot of emails and calls. I eliminated down to where I was interested (in Arizona State) . . . one of the best things Ireland has done has kept their players amateur for longer. I think the ILGU has done it great, to get the players to where they need to be to go pro. There’s no point going pro and struggling on the Access Tour, not making enough money and not having the life you want to live.

“I think, ‘wait until you get older, get an education’ . . . a lot of the girls are looking at America (for college) and then pro rather than rushing into the pro ranks, I think there is a big rush and a big push for it and there is no need for that. I think 22, 23 you are young enough (turning professional).”

That road to the professional game - one which Meadow has taken , and which Maguire is starting out on next week on a sponsor’s invitation to the ShopRite LPGA Classic - is surely one which Mehaffey too will take in a couple of years.

For now, making it to the US Women’s Open - as an amateur - is further proof of an ever upward trending for Irish players on the biggest stages.