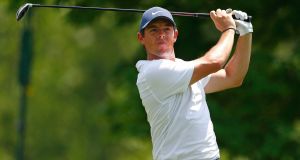 Rory McIlroy of Northern Ireland watches his tee shot on the fifth hole during the first round of The Memorial Tournament Presented by Nationwide at Muirfield Village Golf Club in Dublin, Ohio. Photo: Matt Sullivan/Getty Images

For Rory McIlroy it was a case of inconsistency and three water balls which left him off the pace at two over par after an opening round of 74 at the Memorial Tournament. Mexico’s Abraham Ancer, Joaquin Niemann of Chile and Japan’s Hideki Matsuyama share the lead at seven under par after a very scoreable day at Muirfield Village.

McIlroy – who finished second at last week’s BMW PGA Championship at Wentworth – missed good birdie opportunities at the third and fourth before picking up his first shot of the day at the fifth. However, he would give it straight back with a bogey at the sixth thanks to a short missed par putt which followed an excellent bunker shot.

The putter was proving once again to be the four-time Major winner’s nemesis as another excellent birdie chance went begging at the 10th after a stunning approach from 174 yards left just six feet. However, that putt would slip past and he would fail to birdie the Par 5 11th after driving into a hazard.

After two perfect opening rounds at Wentworth last week McIlroy struggled with consistency at the weekend and it was a similar story that played out on Thursday. Two perfect shots at the Par 4 13th set up a birdie but that was immediately followed by a horror tee shot at the 14th which turned over left, found the water and was then compounded by a three-putt which resulted in a double bogey six. That seemed to take the wind out of the sails of McIlroy and it only got worst at the 18th. For the third time in his opening round the 29-year-old pulled his tee shot left into the water, eventually winding up with a bogey five.

Earlier in the day it took a while for Tiger Woods but eventually he found some of the form that has seen him claim five Memorial titles to sign for a 72 and level par on day one of the Jack Nicklaus-hosted event. It leaves the 14-time Major champion seven shots off the lead but that won’t bother Woods too much after the round threatened to fall off the rails altogether very early on.

After making a run at victory in consecutive tournaments at the Valspar Championship and Arnold Palmer Invitational back in March, the latest Woods comeback has stalled a little in recent starts. But, after saying at the Players Championship two weeks ago that he has his “playing feels” back, Woods has victory very much in his mind this week at a course where he has amassed eight top-10s and a total of $5,059,620 in prize money.

However, his chances of claiming an 80th PGA Tour win were in danger of being blown out of the water in the early stages on Thursday after he slipped back to four over par through just seven holes, later saying that he had “stiffness” in his lower back.

After starting at the 10th he made bogeys at the 11th and 16th while a double bogey at the 15th – courtesy of a drive which flew right and out of bounds – left him floundering. “I wasn’t rotating very well today, back was tight, and just, it is what it is some days,’” Woods said. “And I made a few tweaks in my swing, my setup, and lo and behold, I was able to make some good swings on my back nine and turned the whole thing around.”

Turn it around he did with a birdie at the Par 4 17th setting the ball rolling before another birdie at the second moved him back to two over par. A bogey at the fourth was a setback but Woods then reeled off three birdies in a row at the fifth, sixth and seventh to get back to level par. And it was all capped off with a superb scrambling par at his final hole after he pulled his tee shot left into the trees. Forced to lay up short of the water with his second, Woods then flipped a perfect wedge shot in to five feet before rolling the par putt in to sign for a round of 72.

Woods’ score of level par was matched by world number one Justin Thomas while Rickie Fowler also signed for the same score. However, Shane Lowry could only manage a 73 to sit at one over par.

Despite getting off to a solid start with two birdies in his first eight holes, a double bogey at the ninth proved to be a major setback for the 31-year-old who is looking to move from 82nd into the top-60 of the world rankings to earn a place at the US Open.

Three bogeys and just two birdies on the back nine left him ruing that double at the ninth which spoiled his good start and eventually resulted in a one over par round which leaves him eight off the lead.