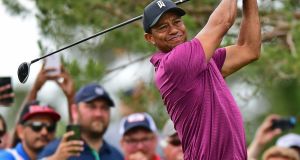 Tiger Woods on the 10th during a Pro-Am before the Memorial Tournament in Dublin, Ohio. Photograph: AP Photo/David Dermer

Tiger Woods admits he needs to learn to win again as he returns to the scene of one of the lowest points of his career this week. Woods has won the Memorial Tournament five times, but also shot the highest score of his career at Muirfield Village with an 85 in the third round on his last appearance in 2015.

That left Woods in last place, and, with 71 players in the field, the former world number one was first out on his own for Sunday’s final round.

“I didn’t want anyone to watch me play,” he joked at his pre-tournament press conference on Wednesday. “I tried and unfortunately that’s all I had.

“I take great pride throughout the years of never bagging it. I’ve tried in every single round and tried to fight to the end and unfortunately I shot 85, the highest round I’ve ever had and it didn’t feel very good.

“Unfortunately on this golf course and hitting it as bad as I did, it just wasn’t good enough.”

Tournament host Jack Nicklaus had said in his own pre-tournament press conference earlier this week that Woods, who has won 79 times on the PGA Tour, was not immune from having to “learn how to win again”.

Nicklaus said he had to do the same on his way to an 18th Major title in the 1986 Masters at the age of 46. Without a win in two years and struggling in the final round, Nicklaus birdied the ninth and 10th before storming home to become the oldest winner at Augusta National.

“I think there’s an understanding of what it takes to finish it off and get a W [win],” said Woods, who is playing his 10th tournament since undergoing spinal fusion surgery in April 2017. “I’ve been on runs where it came pretty easy and other stretches where it was very difficult.

“To me this is a little bit different because it’s coming back off not really playing for a while. I remember the feelings when I was at Valspar [Championship in March], I had a chance to win there and finished second and it really felt comfortable.

“The last few times I’ve had a chance and been up there on the board I felt comfortable, and hopefully I can shoot the low round when I need it.”

Woods is part of a world-class field at Muirfield Village which features eight of the world’s top 10, including new number one Justin Thomas, Rory McIlroy and Justin Rose, who could replace Thomas at the top of the rankings with a second straight win following victory in the Fort Worth Invitational.

McIlroy, who won for the first time since September 2016 at the Bay Hill Invitational in March, finished second in the BMW PGA Championship on Sunday after failing to convert a three-shot halfway lead.

“I’ve earned more world ranking points than anyone this year so that’s a positive,” the 29-year-old told a pre-event press conference. “I’ve only converted one of the chances that I’ve had – I think I’ve played in four final groups – but it’s all going in the right direction.

“It’s just about letting it happen, and maybe not trying too hard. If I can just freewheel a little bit like I did in the last round at Bay Hill I think good results are on the way.”