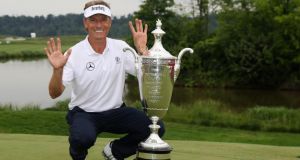 Bernhard Langer became the first player to win all five senior majors as he carded a four-under-par final round to overhaul Vijay Singh at the Senior PGA Championship.

The 59-year-old German, who began the day a shot behind Singh, produced five birdies at Trump National Golf Club on Sunday to finish on 18 under par, one stroke ahead of the Fijian.

His success on the outskirts of Washington DC completes his senior major collection and, after recent victories at the Tradition and the Senior Players Championship, means he currently holds three of the titles.

Singh, a three-time major champion on the main tour, was aiming to make history of his own by becoming the 12th player to win both the PGA Championship and the Senior PGA Championship.

A costly bogey on the 17th ultimately proved decisive as he surrendered his overnight lead and failed to force Langer into a play-off.

American Billy Andrade and Spain’s Miguel Angel Jimenez finished five shots off the pace in joint third, while Scott McCarron and Bob Estes both ended on 12 under.

Scotland’s Colin Montgomerie finished tied for 17th on four under.