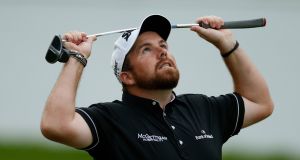 Shane Lowry looks dejected at the end of his final round at the BMW PGA Championship at Wentworth. Photograph: Andrew Boyers/Action Images via Reuters/Livepic

Shane Lowry tried to bite his tongue, to make sense of it all. Nobody needed to tell him one of the biggest titles on tour had slipped from his grasp; or remind him that a €1 million payday – a cheque that ended up in Swede Alex Noren’s hands instead – had been within touching distance, only for a series of unfortunate mistakes down the stretch of the final round of the BMW PGA Championship to leave him as the fall guy.

The 30-year-old Offalyman had played with divine inspiration for much of the final round. However, when it mattered most, some devilish happenings materialised to derail his challenge: a tee-shot on the 15th hole curled out-of-bounds, clipping tree branches before settling mere inches on the wrong side of a green fence as he ran up a double-bogey six; then, to compound matters, another ugly double-bogey on the 17th came after again encountering tree trouble off the tee.

As if to highlight the errors of his ways on those two holes, Lowry manufactured a magnificent closing eagle – hitting a four-iron approach from 230 yards, a high cut that was a thing of beauty, to six feet – that at least enabled him to sign for a closing 69 for 281, seven under, in tied-sixth, but all of four strokes adrift of Noren who had produced a stunning course record 62 to storm his way to the top of the leaderboard.

Although Lowry secured his first top-10 finish since his runner-up to Dustin Johnson in last year’s US Open, that closing eagle – which earned him a payday of €187,550 – didn’t truly heal any of the self-inflicted wounds of those costly double-bogeys on 15 and 17.

The wickedly, curling tee-shot off the 15th came out of the blue. Lowry had hit a lovely tee-shot into the previous hole, the Par 3 14th, to seven feet but watched in disbelief as the birdie putt lipped out. As he made the short walk from the 14th green to the 15th tee, the rain – which only started after Noren had finished – got heavier.

“When it is raining I try to play quickly because I don’t want the ball or the clubface getting wet and I am normally quite good at it. Just as I was over the ball, the marshals were telling the crowd to stand still on the path and I didn’t want to stand off it because then I have to dry my ball and my clubface and my grip and I just hit it a bit quick. It was silly to be honest. It happened, there is nothing I can do about it,” explained Lowry.

Then came another double-bogey on 17. “That was probably a lot more stupid,” claimed Lowry, “to make double-bogey from there was just stupid.”

What happened was that the tee-shot clipped trees on the left of the dog-leg Par 5 and his recovery shot again hit trees and he compounded matters with a poor lay-up third. With the speed of light, it all unravelled in front of him like a nightmare and he was picking the ball out of the cup after seven shots.

The saving grace was his play of the Par-5 18th, where that four-iron approach set up a closing eagle that gave him his best finish since last year’s second place at the US Open. Lowry flies out Monday to the USA for the Memorial tournament, followed by the US Open next month.

“It is a funny game and maybe that’s the taste of contention I needed to give myself a kick in the arse and get on with things and try and do well for the rest of the summer,” said Lowry.