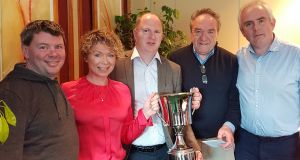 As the Irish challenge faded in the final round, South Africa’s Kyle McClatchie gave himself the perfect 20th birthday present when he won the Brabazon Trophy after a closely fought final round at Woodhall Spa Golf Club.

Chasing him to the finish line were the England pair of Jack Singh Brar and Jake Burnage, together with Scotland’s Jamie Stewart who shot up the leaderboard with a closing round of five-under 68. They shared second place on nine-under 283.

McClatchie becomes the first South African to win the English men’s amateur open stroke play title since Charl Schwartzel in 2002. “This is just amazing, I can’t believe it’s actually happened,” said McClatchie, who had put birthday celebrations on the back burner until after the golf.

A rare chance to blow our own trumpet. The Irish Times team has regained the Media Cup, a hotly contested annual competition for newspaper groups, radio stations and TV companies in Ireland, north and south. Played over the superbly presented East course at Powerscourt the team from Tara Street - represented by Malachy Logan, Carol Kirwan, Michael Ruane and Malachy Clerkin - had a fine score of 89 points in the rumble format for the event, getting over the line just ahead of The Examiner, who were competing for the first time. Previous winners Belfast Media came third in the event, which is sponsored by Powerscourt and Cityjet.

Damien Mooney (Damien Mooney Golf) eagled the par four fifth on his way to a three shot victory at the Dr William Flynn Memorial Trophy. Mooney holed out from 97 yards in a blistering burst of scoring that saw him reach the turn in six under 32 at Shannon Golf Club, Co. Clare. Unfortunately, the Belfast golfer failed to maintain that momentum after the turn, with a trio of bogeys at the 14th, 15th and 16th slowing his charge. However, his tally of seven birdies, an eagle and four bogeys gave him a three-shot cushion on second placed Philip Walton, who signed for a two-under par 70.

Ireland retained the International King’s Cup at Lough Erne Resort but the eventual margin of victory proved to be much closer than expected.

Leading by 30 points going into the 16 singles matches Ireland squeezed over the finish line by a mere eight points. The Ryder Cup style tournament which honours golf’s greatest ambassador, Arnold Palmer, features 16-man teams of club golfers from both Ireland and the USA going head-to-head at Lough Erne.

Under King’s Cup rules, players receive two points for a hole won, one point each for a hole halved and nothing for a lost hole.

Ireland had the better of things on the opening day, finishing a series of fourball and greensomes matches with 303 points to the USA’s 273 points.

With the singles left to play, Ireland needed to break the 576 point marker to retain the title but found the USA side in no mood to roll over.

Three from three for Mehaffey as ASU win National Championship

The Quarterfinals saw Arizona State defeat Florida 5-0, which included a 5 and 4 win for Mehaffey over Samantha Wagner. In an event which was disrupted due to weather conditions, the semi-finals were suspended due to darkness after yet another rain delay. As it stood, Mehaffey defeated world ranked number eight Andrea Lee in the semi-final.

Illinois Northwestern University overcame University of Southern California (USC) to set up an afternoon dual with ASU. Again Mahaffy led her team out and after being five up through seven holes she defeated Sarah Cho 4 and 3.

Mehaffey will now return home to Co. Down for the summer for a busy schedule which includes a trip to Italy for the Vagliano Trophy and to Portugal to represent Ireland at the European Team Championships in July.

GolfNow has renewed their sponsorship of the NI Open for the third year in a row and this year will launch a brand new interactive family event at the tournament. In conjunction with the NI Open, presented by Modest! Golf, GolfNow will host the Junior NI Open to run alongside the main tournament at the Interactive Zone, where children aged 6-9 and 10-13 can take part in the boys and girls competition.

Families stand to win a brand new set of junior TaylorMade clubs for their children. Alongside this great prize, NI Open hosts Galgorm Castle will provide a junior membership to each lucky winner, while the NI Open’s presenting sponsor, Modest Golf Management, will also be supporting the Junior NI Open with Modest Golf prizes.

Leona Maguire captured the GolfStat Cup for the second time in three years for the lowest average versus par on the US collegiate circuit this season. The Duke and Slieve Russell star had an NCAA-best of 70.29 for the 20-event minimum - the lowest in the NCAA since Lorena Ochoa averaged 70.13 in 2002.

During the 2016-17 season, Maguire collected eight top-five finishes, three wins, nine rounds in the 60s and 21 rounds of level par or better.

Maguire also picked up her second PING Player of the Year award and ease the pain of a second NCAA Championship near miss in three years.

The world number one closed with a two under 70 at Rich Harvest Farms but finished one stroke behind Arizona State’s Monica Vaughn, tied for second alongside overnight leader Jennifer Kupcho in the race for the coveted individual title.

The Golfing Union of Ireland have selected six boys for the Sir Henry Cooper Junior Masters, which takes place at Nizels GC in Kent from June 23rd-25th.

Played over four rounds of stroke play, the leading 40 players and ties will qualify for the last 36 holes. Previous winners include Holland’s Joost Luiten and England’s Tom Lewis. There has never been an Irish winner at the event although Gavin Moynihan came within one shot of a playoff in 2011, when he was narrowly edged out by Toby Tree from Worthing.