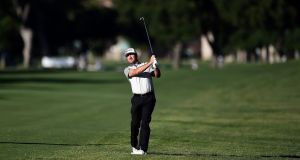 Graeme McDowell hits his approach on the par-five 11th hole during the first round of the Dean & DeLuca Invitational at Colonial Country Club in Fort Worth, Texas. Photograph: Stacy Revere/Getty Images

Colonial debutant Graeme McDowell carded a four-under-par 66 to trail the leaders by one stroke after the first round at the Dean & DeLuca Invitational in Fort Worth, Texas on Thursday.

Northern Ireland’s McDowell has always missed the tournament because it invariably clashes with the European Tour’s PGA Championship at Wentworth in England.

But he kept hearing from other players that his game would be suited to the Colonial Country Club that favours shotmakers rather than long hitters, and with no Ryder Cup this year, he decided it was the perfect time to find out.

“At the back of your mind you’re hoping you making right decisions off tees and get the right strategy on holes. I really felt like I played the course correctly today. Nice to get a low score under my belt.”

McDowell, who lives in Florida, said he would continue to maintain his European Tour membership, but found it hard to turn down the greater riches on offer on the PGA Tour.

“This is where my focus is. My family are here. I love the product that is the PGA Tour.

“The FedEx Cup is so lucrative and I’ve never made it to [the Tour Championship] in Atlanta. I’d really like to get there some time.”

Mickelson also began early and finished in style with three successive birdies, sinking a 30-foot putt at his final hole.

“We got a nice break because it was pretty calm this morning and we had an opportunity to get it going early,” said the 46-year-old.

“The thing about Colonial, you will be rewarded with a pretty good birdie putt if you get it on the green.

“The greens are in perfect shape and they’re fun to putt.

“The course challenges you tee-to-green but once you get it on the green you really have an opportunity to take advantage of the shots you hit in there, as opposed to some courses we play that are overly contoured.”