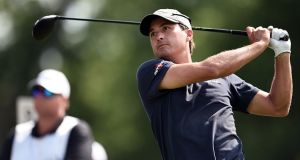 Kevin Kisner claimed his second PGA Tour title as he held off stiff competition to win the Dean and Deluca Invitational in Texas.

The 33-year-old, ranked 45th in the world, had finished in the top 10 in the tournament in 2015 and 2016 and held his nerve to par the 18th and win by one shot from defending champion Jordan Spieth, Sean O’Hair and Jon Rahm.

Meanwhile a second consecutive 72 saw Graeme McDowell slip further down the leaderboard and into a share of 29th place.

American Kisner went round in 66, with consecutive birdies on the 10th,11th and 12th moving him clear at the top of the leaderboard at 11 under par. He dropped a shot at the 16th but the chasing pack could not take advantage.

Kisner told Sky Sports 4: “I’m just honoured to be the champion here and to come back every year and see my name on that wall is going to be something special.

“I’m just happy to win any tournament but especially here, I love this place.”

Kisner’s previous win on the PGA Tour came at the RSM Classic in 2015.

Then his winning margin was six shots but he had nothing like as comfortable a gap on Sunday.

Two-time major winner Spieth produced his best golf of the tournament to push Kisner all the way.

Spieth had dropped at least three shots in each of the opening three rounds but was flawless on the final day, starting with back-to-back birdies before making further gains on the fifth, 10th and 15th for a five-under-par 65.

O’Hair had six birdies in his round but dropped shots on the fourth and fifth cost him, while Rahm also signed for a four-under 66 as he finished in the top five for the sixth time in 10 PGA events.

England’s Paul Casey, who started the day in a tie for second, also saved his worst round of the week for the final day.

An early birdie on the third had put him right in contention, but the 39-year-old dropped shots on the seventh, 10th, 14th and 15th to finish six shots off the pace.