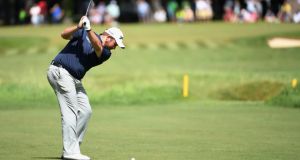 Shane Lowry plays his approach to the 15th hole during day three of the BMW PGA Championship at Wentworth. Photograph: Ross Kinnaird/Getty Images

The signage of the title sponsors is everywhere you look on the West Course, although Shane Lowry did some motoring of his own – spurred on by a “huge” eagle on the 12th – to manoeuvre his way into a challenging position after the third round of the BMW PGA Championship at Wentworth.

With a €1 million payday for the winner, the 30-year-old Offalyman fired a third-round 70 for a four-under-par total of 212 to lurk with considerable intent going into Sunday’s final round.

Australian Andrew Dodt, ranked 251st in the official world rankings, was the surprise pacesetter after he claimed the 54-hole clubhouse lead with a superbly crafted 68 for 208, eight under.

“Look, I’ve been around quite a while now, this is my eighth Wentworth[appearance]. I’ve been here quite a lot and had some decent showings. I know what [Sunday] is going to be like. I can’t wait to get out there and I’m looking forward to giving it a go and see where that leaves me,” said Lowry.

A strong wind whistled through the tree-lined course in the stockbroker belt outside London, causing challenges for many players but Lowry – despite starting his third round with a bogey after a poor tee shot finished in the trees and he could only pitch out on to the fairway with his recovery – stayed calm and very collected to eke out a sub-par round that moved him up the leaderboard.

Lowry’s round really ignited with an eagle three on the Par-5 12th where a six-iron approach out of rough from 206 yards nestled on the green just six feet from the flag. It could have been even better thereafter, as well-struck birdie putts on the 13th and 16th grazed the hole.

But he did manage a further birdie on the 17th – “a tricky hole, with out of bounds sneaking in” – and then played the 18th conservatively for par, avoiding any potential disaster, and walked off with a pep in his step.

With three top-six finishes in this championship in his career, Lowry knows the task that lies ahead.

Paul Dunne – on antibiotics for a throat infection – overcame the illness to shoot a 72 for two-over 218 and moved from the cut line up to tied-40th.

“I actually don’t feel as bad as I sound, my throat’s killing me but apart from that I am fine, my energy is good. My body feels okay, I am sore when I swallow. but I feel much better than I sound,” said Dunne, who is aiming for as high a finish as he can manage in his bid to claim a British Open exemption off the order of merit following the BMW International Open next month.

“The higher you finish the money you get, the better the world ranking points you get, also the Race to Dubai. Money is the catalyst for the rest of the stuff. Money is just money at the end of the day, it is what it can do for you on points lists and world rankings. Obviously we want to finish as high as we can, finish under par tomorrow and climb up a little bit more,” said Dunne of his objective in the final round.