Swede outmanoeuvres all to snatch PGA championship with majestic performance 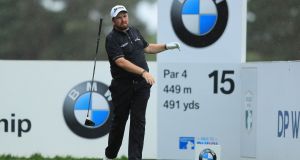 Shane Lowry reacts to his drive on the 15th hole during day four of the BMW PGA Championship at Wentworth. Photograph: Richard Heathcote/Getty Images

A crazy, crazy golfing world. Now we know for sure.

Of all the twists and turns envisaged for the closing day’s play of the BMW PGA Championship, nobody truly saw this one. Alex Noren had entered the fray so far off the pace – seven shots adrift – that he wasn’t seriously on anyone’s radar; yet, by virtue of a magnificent closing round of 62 that was sugar-coated by the addition of an eagle on the 18th green, the Swede outmanoeuvred one and all.

It was a performance of stealth, of such outrageousness, that those players out on the course who looked at leaderboards to see the Swede’s name top of the list were forced to chase him down. Add in the rain factor, which only started after the eventual champion had signed his card, and it was as if all of the stars had aligned for Noren.

Noren was majestic, not least in the execution of his eagle on the finishing holes in front of the packed grandstands. That three-footer for eagle gave him a course record 62 for a total of 277, 11-under-par, and set a mark that nobody would manage to reach.

“It feels very amazing and very crazy,” confessed Noren, “because I had no intention of trying to win [going out].”

For sure, many players left the West Course with regrets. Branden Grace was one of them. The Australian Andrew Dodt another. Henrik Stenson, the Open champion, too.

But nobody had greater regrets or reasons to wonder what might have been than Shane Lowry, who’d played every bit as majestically as Noren for much of the round only to suffer two double-bogeys in the space of three holes – on the 15th and the 17th – to see his challenge, so forceful until that point, blow up in full public view.

Although Lowry ultimately redeemed matters to an extent with an eagle on the 18th, it only served to add more questions than provide an answer to the conundrum of what had unfurled in front of our eyes in a crazy half-hour.

Lowry, let’s recall, reached the turn in a mere 30 strokes. His five birdies on the front nine, including four in a row from the fourth to the seventh, had moved him to the top of the leaderboard and he turned for home with three par-fives ahead of him and the opportunity to claim the European Tour’s flagship title.

But Lowry failed to birdie the Par 5 12th, and the putter – so hot early in the round – turned cold as the rain came down. A lip-out for birdie on the 14th hurt. What happened minutes later, as he pulled his tee-shot off the 15th tee beyond the out-of-bounds fence, effectively killed off his title challenge as he recorded a double-bogey six. It was compounded by a second bogey, on the Par 5 17th, which left him cast adrift. That Lowry turned matters around to eagle the 18th only served to underline what shot-making he possessed in his armoury and showed his resilience.

“It’s my best week in a while. I started like a train and my putter felt fantastic all day. I mean, I burnt the edges even when they weren’t going in. Yeah, a lot of positives, I suppose. So it’s a decent week, a few World Ranking points, a few Race to Dubai points. I’ve got to build on it,” said Lowry, who switches back across the Atlantic to play in this week’s Memorial tournament on the US Tour.

For Noren, the win – as unlikely as it had seemed on the first tee – was brought about by magnificence. A birdie-birdie start got him thinking and, as the round developed, the outlandish thought that he could actually steal the title started to grow. “You always try to get into that zone that everybody talks about, when you’ve got some adrenaline mixed with focus . . . [that] you just need to get it done today, there’s no tomorrow kind of feeling.”

Noren was faultless in sticking to his task, his play epitomised by his approach shot – a five-iron from 225 yards – on the 18th to three feet for an eagle that set the target and, as word filtered back to those further out the course, it was a mark that no one managed to reach or beat. In the end, Noren had two shots to spare over Italian Francesco Molinari. No drama.

Whilst Lowry’s closing eagle enabled him to sign for a 69 for 281 to finish in a share of sixth (earning him €187,550), Wicklowman Paul Dunne also signed for a sub-par round. Dunne’s 69 for 287 left him in tied-30th (for a payday of €48,137) which was a good effort given he had been fighting a throat infection through the tournament.

“It’s a good week given the circumstances of how I felt,” said Dunne, who will compete in the 36-holes US Open qualifying at Walton Heath in his bid to get a place in the field for next month’s Major at Erin Hills in Wisconsin.